Michael Kors Holdings Ltd (KORS): It Had Better Look Out

At the very beginning of this year, The Gap Inc. (NYSE:GPS) decided to drop $130 million to pick up a little chain of stores called Intermix. The brand has only 32 locations in North America and no international footprint. It sits well outside The Gap Inc. (NYSE:GPS)’s other brands, offering $2,000 dresses and jeans for hundreds of dollars. 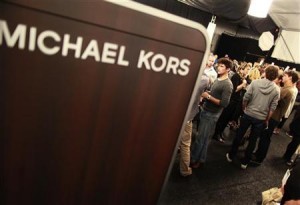 Gap is expecting good things from Intermix, though. The brand has very little online presence and no international offerings. Last week, management highlighted the potential for Intermix, no doubt hoping to capitalize on some of the success that Michael Kors Holdings Ltd (NYSE:KORS) has seen recently.

High-end, high-margin
In its first foray into high fashion, Gap decided to purchase a non-designer. Intermix doesn’t make its own clothing; it’s a boutique for other designers. That means that Gap was able to get into the business without having to acquire excess production and design capabilities. The boutiques don’t carry Michael Kors Holdings Ltd (NYSE:KORS) but do have offerings from designers such as Jimmy Choo and Fendi.

The competition
Michael Kors Holdings Ltd (NYSE:KORS) isn’t going to go quietly along with Gap’s growth plan, though. The company has been pushing sales up at a crazy pace over the past nine months. Comparable sales are up 41% across the brand, and total revenue was up 71%. Michael Kors Holdings Ltd (NYSE:KORS)’s brand strength has never been higher, and it’s quickly becoming the go-to brand for big names.

If Intermix wants to compete, Gap is going to have to scale up quickly and expansively. Thirty-two locations can’t compete with Michael Kors Holdings Ltd (NYSE:KORS)’s 388 stores. But even if Gap can’t beat Kors, it still has a chance to break into a profitable new market. High-end customers have bounced back faster than Middle America from the crisis, and sales at many luxury stores have been strong.

If Intermix can tap into that segment, it should be able to help generate extra cash for Gap and bring that operating margin up slightly. That will give the company more room to run with its secondary brands, such as Athleta.

In the next three years, as Intermix speeds up and Kors slows down, the fight is going to get hotter. Be on the lookout for an Intermix near you soon, and watch Kors’ margins to see whether the company has to dip into discounting to fight off the new threat from Gap.

The article Michael Kors Had Better Look Out originally appeared on Fool.com.