Published on September 21, 2020 at 6:41 am by Insider Monkey Interviews in Bitcoin, Ethereum and Other Cryptocurrencies, News, Tech

In the early days of bitcoin, cypherpunks traded the cryptocurrency amongst themselves, idly wondering whether one day the worthless assets in their possession would have value in the real world. As we all know, the dream came true – only many early adopters had by then sold their bitcoins for peanuts. In any case, the cryptocurrency industry has blossomed since the prelapsarian era in which tech nerds waged esoteric debates on internet forums and used bitcoins to buy pizza. Nowadays, acquiring bitcoin and other virtual currencies is largely hassle-free, thanks to the prevalence of fiat on-ramps, fiat-crypto banking services and peer-to-peer (P2P) marketplaces.

Like Venmo and Square’s (NYSE:SQ) Cash App, Metal has been a key player in opening the digital economy to the wider world. Founded in 2016, the San Francisco-based fintech has built a suite of services that enable users to buy, sell, send and receive digital assets from their smartphone. It is, Metal contends, digital banking for the 21st century, with users able to link up their regular bank account and interact with both fiat and crypto. The app has its own native MTL token, which is dispensed as a reward to users of the platform (a system known as Proof of Processed Payments, or PoPP).

The Metal business model is simple: get as many people interacting with cryptocurrency as possible. The way to achieve this objective is by removing barriers to entry. As CEO Marshall Hayner puts it, “Crypto shouldn’t be hard – you shouldn’t have to think to use it.” Prior to founding Metal, Hayner created QuickCoin, the first Facebook integrated bitcoin wallet that attracted over a million users in 2014. Following this success, he worked on building some of the most talked-about projects in crypto, Stellar, Dogecoin and block.io among them. But these days, Metal consumes his attention.

“Metal was formed when I realized a clear unmet need in cryptocurrency; people needed to be able to buy it seamlessly, use it like money, and be as aware or unaware of their reliance on it as they wanted to be,” he says. “Since its inception, this is what Metal has focused on. We started with a far-reaching vision, and we’re only aiming higher as time passes.”

That’s certainly true. In a blog post published earlier this year, the company indicated that it had gone from 12,500 users at the start of 2019 to 144,000 users a year later, processing over $1 million a month in crypto or fiat. Last year, Metal received an undisclosed angel investment from bitcoin millionaire Erik Finman, and competition has intensified with the likes of Cash App and Venmo. Even PayPal is getting in on the act, with plans to roll out direct sales of crypto to its 325 million users.

Metal in the Corridors of Congress

Back in March, Hayner sponsored a cryptocurrency bill with Paul A. Gosar, the Representative of Arizona’s Fourth Congressional District. The Cryptocurrency Act of 2020 sought to clarify which federal agencies regulated certain types of digital assets, and though COVID-19 disrupted its progress, the experience was eye-opening. 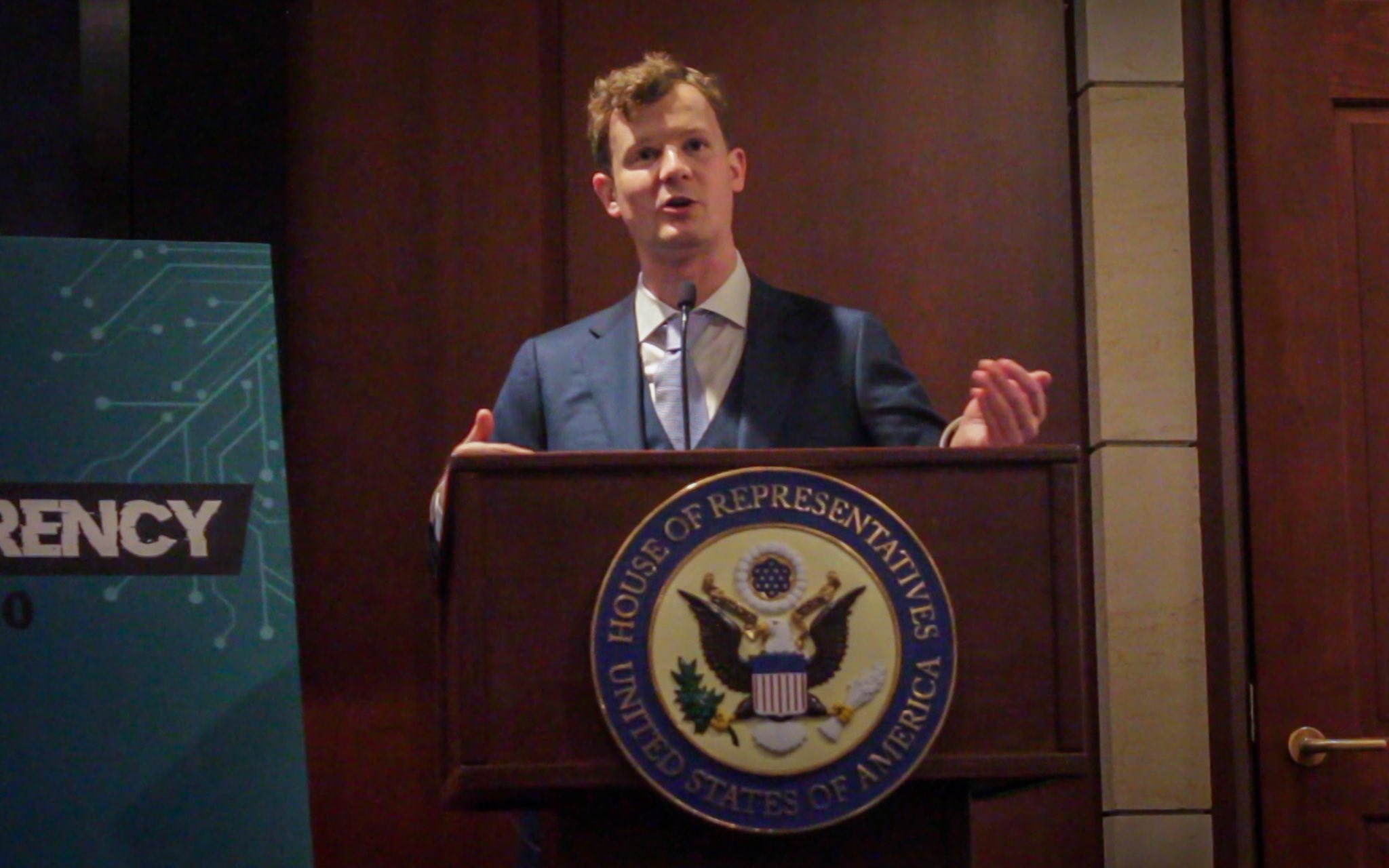 introducing the Crypto-Currency Act of 2020 at the Congress. Source: Twitter

“The bureaucratic hurdles posed by proposing a bill were considerable, but it was an encouraging process when we got down into the details,” reflects Hayner. “When you zoom in closer, you find people at all levels of government ready to help you make this happen.

“I think that people throughout Washington, from staffers to congressional representatives, understand that change is needed. Our bill was well-positioned to make headway before COVID made everything grind to a temporary halt. I still think the act has a chance of being passed, but if not, another bill definitely will at some point in the near future.”

Speaking of regulation, how difficult was it to obtain approval to issue a US debit card via Metal Pay’s partnership with Mastercard? “Gaining approval here was a less of a measure of difficulty and more a measure of commitment. It’s a marathon, not a sprint; we just needed to show consistent effort and thoughtfulness at every level.”

Standing Out Amid Fierce Competition

“Metal is much more than just a way to buy or sell cryptocurrency; we’re great at that, but our vision goes far further. We’re building a cryptocurrency ecosystem ready to meet the needs of people at every level, from someone unexposed to cryptocurrency all the way up to the blockchain developer.

“Our Metal X exchange, for example, is for the crypto-exposed – someone who knows what they’re doing and is ready to do it better. We designed it to be intuitive, beautiful to use, and a simple way to earn cryptocurrency through referral programs and attractive maker/taker fees. Metal Pay 3.0 will be a giant leap towards realizing our vision for how crypto should feel, and with the Proton blockchain, we’re reimagining how money should work and striving to strike a balance between privacy, security, and speed, with the user not needing to sacrifice to enjoy all of the above.”

Proton (XPR), a proprietary blockchain that provides the rails for Metal X and uses a dPoS consensus layer, interacts directly with the card and bank payment settlement layer, providing a valuable bridge between blockchain and bank. As Hayner noted during a ten-hour AMA session back in May, this means that a user could “request some USD from your Visa debit card from a TrustWallet or Trezor.”

With its mainnet having launched in April, Proton is at the centre of developments in the Metal universe: Proton wallet users are now able to “mint” Proton stablecoins (XUSDT) from Tether (USDT), the former of which can be used to interact with the network’s integrated apps and numerous shopping cart software.

Preparing to Enter the Defi Playground

Metal currently has plans to develop an easy in-wallet swap interface with user-supplied liquidity pools, building on the success of Ethereum’s Uniswap. Speaking of which, what does Hayner make of the defi boom, the land of trustless lending protocols, yield farming and decentralized exchanges?

“I see tremendous growth coming in the defi area in general, but especially as it comes to stablecoins and wrapped coins. I’ve been telling anyone who will listen: if you want to prepare for the near-future in crypto, start learning everything you can about wrapped coins.”

Any business operating in this sector, whether it’s Metal, PayPal or a major crypto trading platform like Binance, must appreciate that on-ramps and UX have to be near flawless to encourage the next wave of mainstream users. On-ramps appear to be taking care of themselves, but what about the onboarding process more generally?

“One of our biggest areas of optimization at Metal is the onboarding experience,” says Hayner. “First, it takes just 17 ‘clicks’ or taps on your phone to go from downloading our app to having your first account – nobody else touches that number, as far as I’m aware. We’re also rolling out tiered onboarding, which allows us to bring someone into the Metal ecosystem as far as their locale allows – or as far as they’re willing to go.

“Finally, every Metal Pay user who fully onboards receives an FDIC-insured Cash wallet, their own account and routing number, the ability to send cash and crypto to friends, and a cryptocurrency exchange that comes hooked up to this new ‘bank account.’ This is what banking the unbanked looks like, and this is what our mega-corporation peers are going to start doing on their own very soon.”

The Metal guru’s passion is infectious. And he has good reason to be optimistic. Not only is the company well-placed to capitalize on wider interest in crypto, but it is actively helping to drive the change. Whether the mooted cryptocurrency bill makes it through Congress is anyone’s guess. In the meantime, Metal is focused on building an onramp fit for the next wave of crypto users.