Recently, I have focused in on some companies that play a major role in diabetic’s lives like mine. The financial implications of this disease are astounding, and have presented what seems to be a great opportunity for investors. Today, I will discuss the earnings results of some of the largest players involved with the disease.

Let’s get the biggest surprise (to me) out of the way. I have been boasting about the opportunities that diabetes presents to investors, but one company, actually one drug, is showing why its just a theory. Merck & Co., Inc. (NYSE:MRK) reported a surprising drop in Januvia, its biggest product, which is used for the treatment of type 2 diabetes. Januvia’s sales fell 4% this quarter to $884 million. The drug was approved in 2006 and has since been the company’s fastest growing medicine.

Sales of Janumet, a pill which combines Januvia with the diabetes treatment Metformin, increased by 4% to $409 million. In the previous quarter, both medicines saw sales increase by more than 15%. Januvia is a drug that is starting to mature, and should see solid but slower growth (because of increased competition) over the next several years. Despite the fall of Januvia, the company reported better profits than expected, although this is probably due to a favorable tax rate. Additionally Merck & Co., Inc. (NYSE:MRK) said it would buy back about $7.5 billion worth of shares over the next year, due to its board authorizing additional purchases of up to $15 billion of its common stock.

The company’s stock has increased (though its been somewhat of  a roller coaster ride) since the release of Januvia in 2006, as the chart below shows: 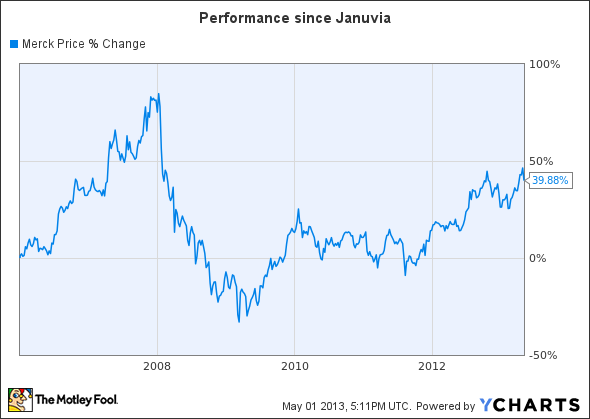 I’ve been talking up Novo Nordisk A/S (ADR) (NYSE:NVO) for a while now, and am not surprised, or disappointed, with its just-released earnings. The company’s vision is to “Defeat diabetes by finding better methods of diabetes prevention, detection and treatment.” It’s 28% increase in profits from insulin and the Victoza diabetes treatment should help investors feel even more comfortable with the company. Net income rose to over $5.98 billion, $0.16/share better than the twenty analysts surveyed by Bloomberg had expected.

Sales of its “modern insulins”, including Levemir, climbed 14% to $8.99 billion. I’m not surprised by this, as Novo Nordisk A/S (ADR) (NYSE:NVO) is the world’s largest insulin manufacturer. Sales of Victoza, which mimics a hormone called GLP-1 and stimulates natural insulin production, rose to $2.68 billion in the quarter – an increase of 35%.