Mercadolibre Inc (MELI): Spice Up Your Portfolio With the Latin eBay

Known as the “eBay Inc (NASDAQ:EBAY) of Latin America,” online auction site Mercadolibre Inc (NASDAQ:MELI) is often hailed as one of the great emerging market stocks – and for good reason. The company enjoys a majority e-commerce market share in nearly every developed country in Latin America – a fertile ground for online retail thanks to rising Internet penetration, increased credit card usage, and a growing middle class. So what makes MercadoLibre tick? Will the company continue to grow, or will concerns about declining GDP and rising inflation hurt the company’s growth prospects? 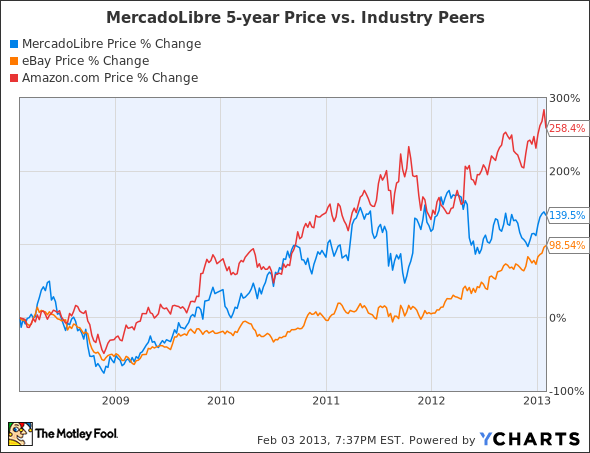 MercadoLibre caught my eye during a recent search for momentum growth stocks. I wanted to find stocks that had demonstrated strong past performance through high ROI and ROE, as well as powerful momentum based on high expectations, using higher than average P/E ratios.

Here are the minimum criteria I initially set.

Only three stocks in the entire U.S. market fit all seven criteria: Lululemon Athletica inc. (NASDAQ:LULU), Mercadolibre Inc (NASDAQ:MELI) and SolarWinds Inc (NYSE:SWI). MercadoLibre interested me the most, as it would complement my previous article regarding Amazon.com, Inc. (NASDAQ:AMZN)’s growth initiatives in Brazil. So how does MercadoLibre stack up in those seven categories?

That impressive top and bottom line growth shows that Latin America e-commerce is a force to be reckoned with.

MercadoLibre (“free market”) is eBay’s Latin American partner, and is currently the region’s number one e-commerce site. It has a sprawling presence across 13 Latin American countries. Its website operates in the same way as eBay – buyers bid on desired items within a limited amount of time to win auctions. MercadoLibre also offers a “fixed price” system – used by 80% of sellers – similar to eBay’s “Buy it Now” option.

Buyers then use MercadoPago (which is similar to eBay’s PayPal system), credit cards or money orders to pay. Based on eBay’s incredible success with PayPal, MercadoPago could evolve into a challenger to Visa Inc (NYSE:V) or Mastercard Inc (NYSE:MA), as the market for mobile cashless payments increases.

MercadoLibre became a regional monopoly in 2005, after acquiring primary rival DeRemate’s operations in Brazil, Colombia, Ecuador, Mexico, Peru, Puerto Rico and Venezuela. This move consolidated MercadoLibre’s rule in Latin America, and it has been unchallenged since.

Due to the international, cross-border nature of its e-commerce business, conflicts have risen when regulated products, such as pharmaceuticals, were shipped by MercadoLibre merchants to other countries without appropriate permits.

Illegal transactions and fraud have also been problematic to the company, but nearly impossible to police due to the size of its operations. MercadoLibre employs a “buyer beware” policy on its site, but it is not legally enforced.

Let’s compare population and Internet penetration across the Americas.

Notice that Central and South America – MercadoLibre’s primary markets – distantly trail North America in Internet penetration. That means Internet-related businesses, such as search and e-commerce, will flourish in the next decade if consumer spending increases accordingly.

Although the hottest days of Latin American growth are behind it, all six countries have posted a slow but certain recovery from the nadir of the financial crisis in 2009.

However, all of the countries except Colombia and Peru have declined since 2010. Brazil, the largest Latin American economy, posted the sharpest decline, and preliminary forecasts for its 2012 GDP growth see a continuation of the downtrend, down to 1.03% growth.

This means that although GDP growth isn’t as hot as it used to be, it isn’t a reliable indicator of e-commerce growth. Growing credit card penetration rates and mobile growth will also boost e-commerce, especially in younger markets such as Argentina. The popularity of MercadoLibre’s Android App strongly suggests  healthy mobile growth prospects.

However, inflation in several key areas of Latin America could hurt MercadoLibre, since the company collects revenue in ten different currencies but only reports earnings in U.S. dollars. That’s a lot of unpredictable foreign currency impacts on its bottom line.

While MercadoLibre is considered a bellwether of its industry, investors should also keep a close eye on Amazon. Amazon’s recent push into Brazil – MercadoLibre’s weakest market with a 20% share – shows that it’s ready to play rough and expand its brand into Latin America. These baby steps, especially assisted by the recent launch of the Kindle Fire in South America, could disrupt a market that MercadoLibre has so easily dominated over the past decade.

The article Spice Up Your Portfolio With the Latin eBay originally appeared on Fool.com and is written by Leo Sun.

How You Can Time The Market Successfully: Linkedin Corporation (LNKD), Netflix...