In a pinch, most men could shave without a mirror by smearing canned shaving cream across their skin and scraping away at their face with a modern razor. They might miss a few whiskers, but they can nab those with an electric foil razor – again without looking – when they’re done.

At first glance, shaving without a mirror seems like a testament to superb shaving skills. In reality, it reveals a lack of shaving skills. The truth is, skills aren’t necessary to shave with a modern razor. Today’s cartridge and disposable razors are specifically designed to eliminate the risk of cutting yourself. Shaving without a mirror isn’t a skill – it’s a cry for help from a generation that is just beginning to realize there’s a better way. 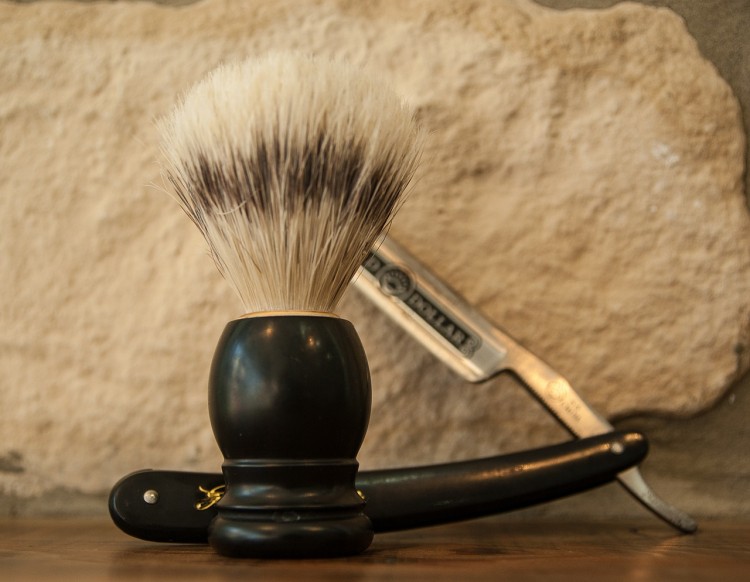 Men love nostalgia, even if it’s not from their own childhood. Perhaps that’s why an increasing amount of men are ditching modern razors for the straight razors and safety razors their grandfathers used.

Some men start by collecting safety razors because they’re drawn to the look of chrome-plated machined brass. Before long, curiosity leads them to try shaving with one of those razors and they discover the best shave of their life. As more men experience the benefits of shaving with old-fashioned razors, they post blogs and videos on YouTube to share their experiences. This word-of-mouth advertising for classic shaving tools is heavily responsible for the surge of interest in classic shaving tools.

To meet this growing demand, online razor companies are adding classic wet shaving tools to their inventory like safety razors, shaving soap, brushes, and scuttles. While most men buy brand new razors from upstarts like Shave.net, some men prefer using the actual razor their grandfather used (with fresh blades of course). The durability of classic razors is just one benefit. Getting a closer, smoother shave is the grand prize.

Getting a painless, close shave requires a single sharp blade

The science behind getting a painless, close shave is simple. To get a close shave without razor burn or bumps you need a sharp, unobstructed blade and some basic wet shaving skills. With the correct angle and minimal pressure, the single sharp blade of a safety razor will cut the hair close to the skin in a single pass. You can slap a bunch of blades on a plastic razor and get a seemingly close shave, but it comes at the price of your skin.

“Cartridges take off extra skin that can cause a lot of irritation for guys with sensitive skin,” says Los Angeles barber Chris Ramos. “And come winter, you’ll need those extra layers to protect you when frosty winds are licking the moisture off your face.”

After getting an exceptionally close shave that doesn’t tear up their skin, men who shave with a safety razor for the first time quickly realize there’s no going back.

A better shave is worth the sharp learning curve

There is a steep learning curve when it comes to shaving with antique razors, but it’s a risk many are willing to take. Several classic wet shavers shared their experiences with the Wall Street Journal declaring their first unsuccessful, bloody attempts at shaving were worth it. Once they found the right blade angle and improved their technique, they wouldn’t go back to modern razors for anything.

Men who take the time to develop shaving skills feel a sense of pride and accomplishment during their daily shaving ritual. To feel that sense of pride is worth risking a little blood.

How steep is the learning curve?

If you know anything about old-fashioned razors, you know the blades are sharp and not wrapped in safety wire like some disposable and cartridge razors. A blade not wrapped in wire increases the potential for nicks and cuts. Cartridge and disposable razors have blades set at the optimal 30-degree angle, which also minimizes cuts. With straight and safety razors, it’s necessary to manually hold the razor at the proper angle throughout the entire shave.

These factors make traditional razors riskier to use, but only in the beginning. The learning curve is steep and sharp, but once basic skills are attained the likelihood of slicing yourself up is far less.

If it’s not broken, don’t fix it

The introduction of plastic, disposable razors killed the art of the wet shave. Disposable razors were introduced to consumers in the late 1960s and early 1970s as a safe and convenient way to shave, but it was really a method for razor companies like Gillette to generate regular income. After using these cheap razors for several decades, men forgot about the quality and ease of using traditional razors.

Advertisers scared men away from ‘dangerous’ straight razors and herded everyone toward the safety of plastic razors. Soon, razor bumps and ingrown hairs became the norm and nobody knew there was a better way. It took a new generation of men with a love for nostalgia to bring the lost art of classic shaving back to the world.