I’ve heard many discussions regarding whether Ford Motor Company (NYSE:F) is fairly valued as it sits around $13.50 per share, or if it’s a strong value play with a lot of upside. I decided to dig into some numbers and create a simple estimate on how quickly Ford’s pre-tax income could grow by the end of 2015. I’ll then explain a few of the caveats that are left out of the estimate — because there are plenty.

We’ll start cautiously by using Ford Motor Company (NYSE:F)’s 2012 pre-tax income of $7.7 billion. This number will be higher than the net income we would eventually see, but I’m not going to speculate on what tax rates Ford will pay. We’ll break it down, then total it up, and you might be surprised at the pre-tax income growth Ford could offer investors over the next two to three years.

North America
It makes sense to start here in the homeland, where Ford Motor Company (NYSE:F) derives nearly all of its profits right now. Just how much, you ask? Take a look. The U.S. automotive market has picked up steam in 2013, helped by a gradual rebound in the economy overall and the housing industry. Thanks to the latter, we can expect demand for the F-Series pickup to remain strong, helping Ford maintain its recently reported 11% operating margin. 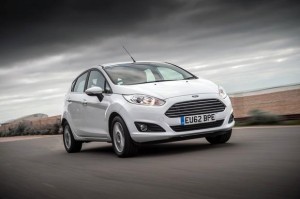 In two years, the U.S. market is expected to exceed 16.4 million vehicles sold, and using Ford Motor Company (NYSE:F)’s recent market share of 15.9%, that would bring in an incremental 175,000 vehicle sales. Because the F-Series can sell for almost twice the amount of other vehicles in Ford’s lineup and is the company’s No. 1 selling vehicle, we’ll say the average invoice price is $36,000. At the 11% margin, that would bring in roughly $692 million in pre-tax income. By adding that to our base number, we’re sitting at about $8.4 billion so far.

China
China is where Ford Motor Company (NYSE:F) hopes to get a large return on its investment to pad the bottom-line figures as the decade progresses. Ford is trying to expand market share in China at an unprecedented pace by releasing 15 new vehicles by 2015. The plan is to double its market share from 3% to 6% by mid-decade. By 2020, China’s market is expected to expand from just over 19 million vehicles to 35 million. We’ll be cautious in case growth is slower than expected in the short term, and we’ll say China hits 24 million in 2015.

If we use Ford Motor Company (NYSE:F)’s goal of 6% market share — with a vehicle invoice averaging $30,000, which might be the only estimate that’s not conservative — that would bring in revenue of $43.2 billion. Let’s take that number and cut it in half from the joint ventures taking their slice of the pie. Then let’s apply a thinner margin of 5%, with no F-Series bringing home absurd margins. That brings us to a cautious $1.08 billion in pre-tax income — bringing our total 2015 estimate to nearly $9.5 billion.

Now let’s look at Europe and get a feeling for why it has — in my opinion — held Ford’s stock price down.