It is hard to buy food or pay rent when you are unemployed. Double-income families can usually handle the effects of unemployment by relying on one income instead of two. In this situation, families are forced to cut back. Right now the world economy is growing, and people are spending more. The falling unemployment rate has caused a number of low-cost companies to suffer. 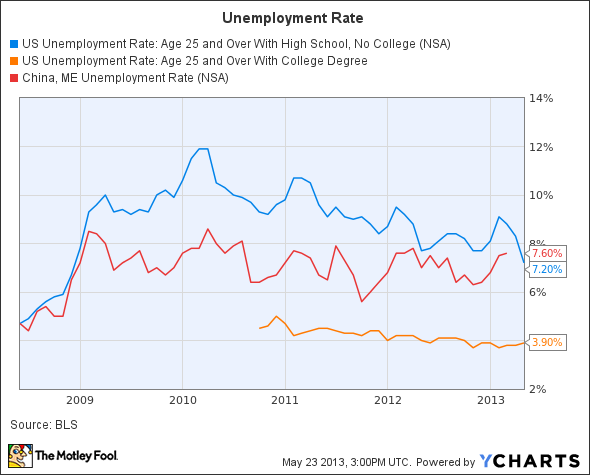 US Unemployment Rate: Age 25 and Over With High School, No College data by YCharts

McDonald’s Corporation (NYSE:MCD) is the staple of the fast food industry. With its dollar menu it is able to provide a cheap meal to meet the needs of income constrained consumers. The company has grown rapidly in the past couple years, but it is not immune to global economic improvement. In the first quarter of 2013 U.S. comparable sales declined by 1.2%, and challenging conditions in China and Japan further dragged down comparable sales in Asia/Pacific, Middle East and Africa by 3.3%.

Yum! Brands, Inc. (NYSE:YUM) is not immune to China’s improving employment prospects. More of China’s workers are moving to the cities in search of higher paying jobs. Yum! Brands, Inc. (NYSE:YUM) serves these Chinese consumers who are looking for a little extra without breaking the bank. The company has made a major bet on China and of its $13.6 billion 2012 revenues, around $6.9 billion came from the company’s China division.

Yum! Brands, Inc. (NYSE:YUM) has some major short term difficulties. In its first quarter results, KFC same store sales in China fell by 20% after a supplier sold meat with too many antibiotics. Considering the situation, Yum! Brands, Inc. (NYSE:YUM)’s profit margin of 14.5% is respectable. The company has a latent risk with its significant debt load. Its total debt to equity ratio of 1.28 is far above McDonald’s.

The low unemployment rate of skilled workers hurts the company. Many people prefer to shop at higher quality stores if possible. In the first qaurter of 2013 executives worked as hard as possible to distract investors from its 1.4% decline in comparable U.S. same store sales. Overall, The company is still profitable with a return on investment of 15.1% and a profit margin of 3.8%. Wal-Mart Stores, Inc. (NYSE:WMT) is a good play on American economic hardship, but short term improvements in the economy will challenge the firm.