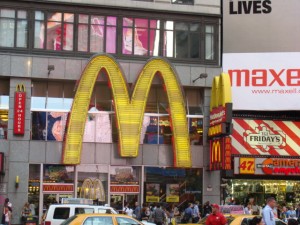 They now plan on opening 700 new stores in China by the end of 2013, which would bring their total up to 2,000. This will bring 50,000 new jobs to China, 1,000 of which will be university graduates for managerial jobs. This move will also pay out huge dividends to investors for decades to come.

Yum! Brands, Inc. (NYSE:YUM) is also planning on opening 700 stores in China in 2013, on top of their already massive 5,200 store count in China. Yum! is McDonald’s Corporation (NYSE:MCD) main competitor in China with its KFC and Pizza Hut stores.

KFC is Yum! Brands, Inc. (NYSE:YUM)’s biggest success in China, but recently, slowing economic growth and the bird flu epidemic are really hurting Yum!’s growth prospects. In March, primarily due to the bird flu scare, KFC same-store sales were down 16%. Compared with the 4% growth for Pizza Hut, it looks like the bird flu (which sadly has killed 13 people so far) is scaring consumers away from chicken. Luckily for McDonald’s Corporation (NYSE:MCD), beef and fries are their staples, not poultry.

In February, McDonald’s global same-store sales were down 1.5% (slightly better than the 1.6% decline analysts were expecting), and in the Asia Pacific, Africa, and Middle East region, sales were down 1.6%. On the flip side, management said that sales in China were “positive.” While positive isn’t an exact number, that does give investors some optimism on future growth.

If China comps can grow while everything else is contracting, then what kind of growth can you expect in better times. In 2011, Yum! Brands saw a 20% increase in same-store sales. Maybe, with consumers shying away from KFC, McDonald’s could see some double-digit same-store sales growth on the back of better market share. That would help them turn around total same-store sales, which were down 1.9% and 1.5% in January and February, respectively.