With new numbers hot off the press showing mixed results of the three burger giants, McDonald’s Corporation (NYSE:MCD), The Wendy’s Co (NASDAQ:WEN) and Burger King Worldwide Inc (NYSE:BKW), I thought I would throw some other numbers into consideration between statistics of revenues and earnings: the potential over/undervaluation of each company. I have combined three metrics to test which companies may be over or undervalued in the industry. Hopefully you will learn something about the market, as well as three new ways to test the valuation of companies in an industry.

One of my all-time favorites, tangible book value per share, or TBVPS, is a measurement of the portion of tangible assets (all assets, with the exception of goodwill and items classified as “intangible” on a company’s balance sheet) attributable to each share of the company’s common stock.

This means that it is helpful in establishing a valuation of a company, and whether or not it may be over or undervalued. This is important because lots of company’s balance sheets can reflect asset valuations that are inflated by intangibles; yet, if a company were to go bankrupt, the tangible value of assets a company has would be what is left over after bankruptcy.

So, if you own shares of a company that has incredibly high levels of assets (that are all intangible) and it goes bankrupt, you may be in trouble. Analyzing this ratio is one way to avoid this. A simple way to put this would be that tangible book value answers the question, “as a shareholder, what would I receive if the company had to liquidate all of its assets?” By measuring this value per share, we create a ratio that measures valuation. 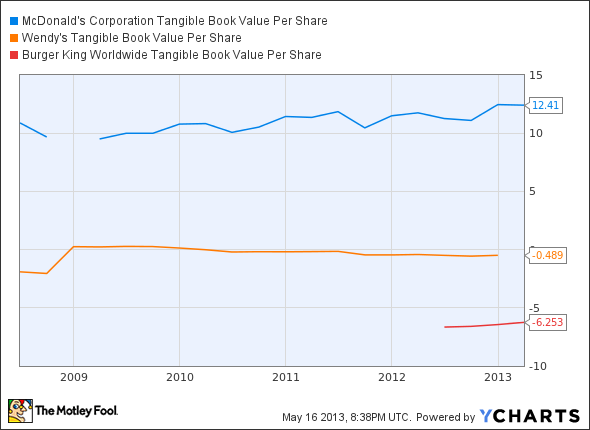 This ratio tells the relationship between a company’s enterprise value and its EBITDA, or its earnings before interest, taxes, depreciation, and amortization, a common value used to measure the earnings of a company. The enterprise value is a less-often used alternative to traditional measurements like market capitalization. EV is often considered to be the theoretical purchase price of a company should a purchaser takeover the company and thus take on the company’s debt, while keeping the cash and gaining rights to the future earnings of the company. 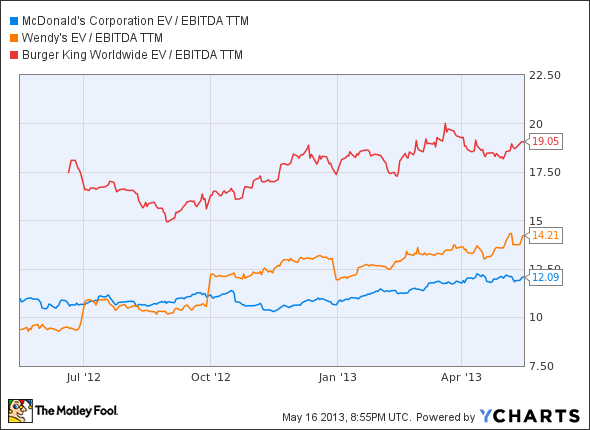 As the chart illustrates, McDonald’s Corporation (NYSE:MCD) has the lowest EV/EBITDA ratio, with Wendy’s in the middle and Burger King Worldwide Inc (NYSE:BKW) coming in highest, meaning that the most undervalued company of the burger bunch is McDonald’s Corporation (NYSE:MCD), with the King as the most overvalued, and The Wendy’s Co (NASDAQ:WEN) somewhere in between.