Over the past decade, the fast food industry has rapidly evolved. Fast food companies revamped their domestic menus to cater to a more health-conscious population, while expanding overseas in search of higher growth.

Increased competition from a disruptive group of bistro eateries such as Panera Bread Co (NASDAQ:PNRA) and Chipotle Mexican Grill, Inc. (NYSE:CMG) also forced lower-end restaurants to offer higher quality food. Meanwhile, a struggling global economy highlighted the importance of value menus. Unpredictable food cost fluctuations and weather conditions have also made it tough to grow margins and profits. In other words, it’s a tough business to thrive in.

Let’s check in on the three largest hamburger restaurants in America – McDonald’s Corporation (NYSE:MCD), The Wendy’s Co (NASDAQ:WEN) and Burger King Worldwide Inc (NYSE:BKW) – to gauge the health and future of the fast food industry.

Industry leader McDonald’s Corporation (NYSE:MCD) has been constantly dragged down by Europe, which accounts for roughly 40% of its top line. In April, same-store sales in Europe slumped 2.4% as the ongoing European crisis continued. Meanwhile, same-store sales slid 2.9% in the APMEA (Asia-Pacific, Middle East, Africa) region due to the outbreak of the H7N9 avian flu. In Asia, McDonald’s was able to insulate itself better from the impact of the avian flu better than its rival, KFC parent Yum! Brands, Inc. (NYSE:YUM), thanks to its more diverse non-chicken menu offerings. 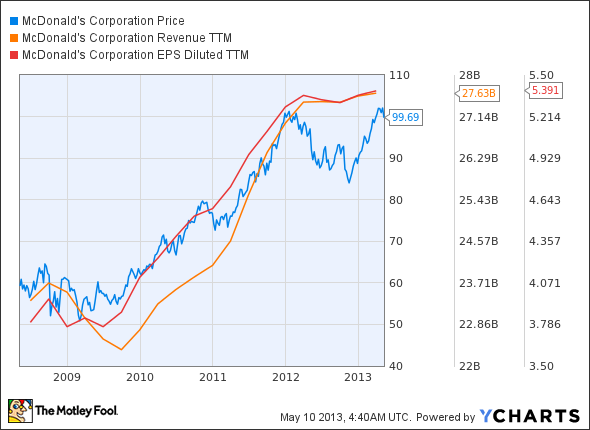 On a bright note, McDonald’s Corporation (NYSE:MCD) reported a 0.7% increase in U.S. same-store sales for April, which came in ahead of analyst estimates. McDonald’s attributed this gain to the release of premium McWraps and strong sales of value menu and breakfast items. However, that anemic gain wasn’t enough to offset its disastrous overseas results.

McDonald’s has stated that it intends to roll out more limited-time offers to attract more customers as well as diversify its menu offerings. More importantly, the company has stated that it is willing to sacrifice profitability to gain market share, which was reflected in its first quarter earnings. During the first quarter, consolidated net operating income came in flat on a constant currency basis, diluted earnings per share edged up 2% while revenue rose 1%. Same-store sales fell 1.0% worldwide.

While McDonald’s Corporation (NYSE:MCD) is stuck in a slow growth cycle with low-single digit top and bottom-line growth, rival The Wendy’s Co (NASDAQ:WEN) is taking some big risks by spending heavily to renovate its restaurants to more closely resemble bistro eateries that have been rising in popularity. 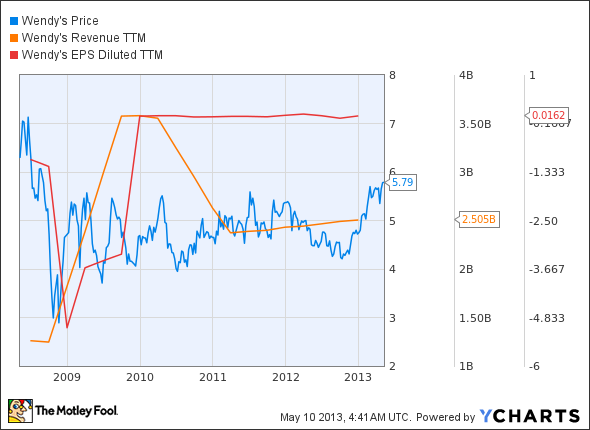 The Wendy’s Co (NASDAQ:WEN) is installing flat screen televisions, fireplaces and higher-quality seating areas to its restaurants. The company intends to remodel half of its company-owned restaurants by the end of fiscal 2015. The Wendy’s Co (NASDAQ:WEN) is working to distance itself from McDonald’s and Burger King, choosing to follow the path of Panera Bread and Chipotle by offering higher-quality food in classier environments. Wendy’s new flatbread grilled chicken sandwich, one of its new higher-quality offerings, sold well in April, according to the company.

Although Panera Bread and Chipotle have grown rapidly, it’s uncertain if Wendy’s can replicate that success. These higher costs are a risk for Wendy’s, which just reported that it only earned a penny per share, or $2.1 million, in the first quarter. Although that profit topped modest expectations, it was an 83% decline from the 3 cents per share, or $12.4 million, it earned in the prior year quarter. However, its year-ago earnings included a benefit of $0.05 per share from the sale of an investment, which means that Wendy’s earnings actually slightly improved from last year.

The Wendy’s Co (NASDAQ:WEN) revenue rose 2% to $603.7 million, but missed the consensus estimate of $615 million. Same-store sales were roughly in line with McDonald’s Corporation (NYSE:MCD), rising 1% at company-owned locations and 0.6% at franchised ones.

In addition, The Wendy’s Co (NASDAQ:WEN) is focusing on remodeling stores at a time when its competitors are pinching pennies to squeeze out more value menu offerings at thin margins to gain market share. Wendy’s currently offers a “Right Price, Right Size” value menu of items ranging between $1 to $2, but these initiatives have had a limited impact on revenue growth. The company plans to address this problem with new 99-cent offerings during the current quarter.