This morning, the Department of Labor reported that nonfarm payrolls grew by 236,000 in February and the unemployment rate fell from 7.9% to 7.7%, led by job gains in professional and business services, construction, and health care. Nonfarm payrolls include both public and private-sector jobs but do not include farming jobs. Both these numbers were better than economists had expected at the start of the week and above the three-month average jobs growth of 195,000. Following January’s low jobs growth of just 119,000, economists were expecting jobs growth of 160,000 and an unchanged unemployment rate of 7.9%. 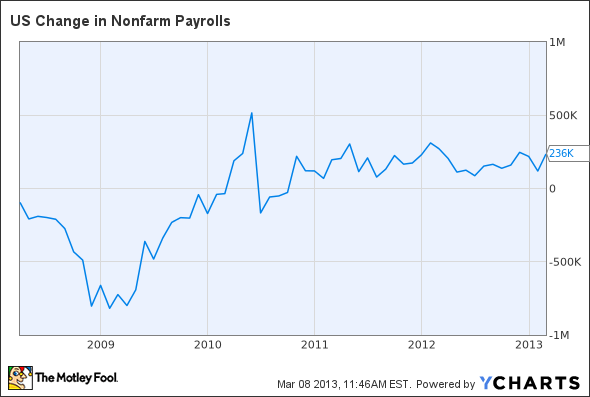 While the jobs report smashed economists’ expectations from earlier this week, payroll processor ADP released its private-sector payrolls report on Wednesday, showing that private-sector jobs growth was better than expected in February. ADP always releases the report two days before the government report, giving investors a general idea of the employment situation. Therefore today’s positive jobs report was not totally unexpected, hence the markets’ moderate response to the news.

Jobs growth and employment are especially important, as consumer spending makes up 70% of the U.S. economy. Another reason the market is not up higher today is the lower unemployment rate is a bit misleading as it was mainly caused by people leaving the labor market. More and more baby boomers are deciding to retire. The rate of people leaving the jobs market is higher than the number entering which has been the primary reason the unemployment rate has been shrinking.

In February, McDonald’s Corporation (NYSE:MCD) sales declined the most in the U.S. with a 3.3% drop. Excluding the extra day in 2012, same-store sales in the U.S. were flat. In the Asia-Pacific region, sales were down 1.6%, or up 1.5% excluding the extra day. In Europe and Russia, sales were down just 0.5%, or up 2.7% excluding the extra day. McDonald’s Corporation (NYSE:MCD) has high hopes for China, where it plans to have 2,000 stores by the end of the year. For comparison, Yum! Brands, Inc. (NYSE:YUM) — owner of KFC, Taco Bell, and Pizza Hut — has more than 5,000 locations in China.

The article This Stock Is Leading the Dow’s Rise originally appeared on Fool.com and is written by Dan Dzombak.