McDonald’s Corporation (NYSE:MCD) served up better-than-expected same-store sales figures for February. The company released its sales report this week, which showed that global sales at existing restaurants fell 1.5%, compared with the 1.6% decline analysts had initially forecasted. The fast food chain’s same-store sales in the U.S. were down 3.3% for the month, better than the 3.5% expected drop.

At first glance, these numbers may seem trivial. However, the results provide insight into important business trends that can help investors better assess the company’s performance in markets outside the United States. This is a small step in the right direction for the world’s biggest hamburger joint. It was enough to push the stock up nearly 2% on Friday.

A recipe for profits
Menu innovation is important for Mickey D’s going forward if it hopes to keep an edge over competitors, such as Burger King Worldwide Inc (NYSE:BKW) and The Wendy’s Company (NASDAQ:WEN). Burger King Worldwide Inc (NYSE:BKW)’s re-entrance to the public market last year came complete with a menu revamp. In fact, the debut marked the biggest menu expansion since Burger King was born in 1954, according to Bloomberg.

Make no mistake: McDonald’s is still the leader in fast food. “For the first time in the history of the burger wars, the Golden Arches control more than half the category,” according to Roben Farzad at Bloomberg. Shares of McDonald’s Corporation (NYSE:MCD) are up more than 9% in 2013. Take a look at its price performance year-to-date compared with industry peers. 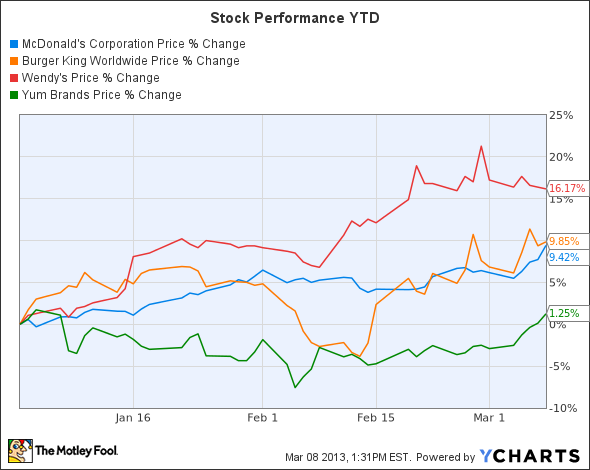 The company’s international exposure could take a bite out of profits as consumer confidence wavers in major markets, such as China and Japan. Not to mention that McDonald’s Corporation (NYSE:MCD) and rival Yum! Brands, Inc. (NYSE:YUM) have been under pressure in China after news broke that the restaurants served chicken with heightened levels of harmful hormones.

But the Fool’s top analyst on the company says you shouldn’t be worried by these trends.

The article McDonald’s Gives Investors a Reason to Smile originally appeared on Fool.com and is written by Tamara Rutter.

Fool contributor Tamara Rutter has no position in any stocks mentioned. The Motley Fool recommends Burger King Worldwide and McDonald’s and owns shares of McDonald’s.