McDonald’s Corporation (MCD), General Electric Company (GE), Intel Corporation (INTC): Wall Street Got It Wrong — But You Don’t Have To

If you’re in the macro know, there’s no beating around the bush: Federal Reserve Chairman Ben Bernanke’s statements this week were major market movers. But as the Dow dipped and the S&P shuddered, long-term investors have a huge reason to celebrate. Here’s why.

Bernanke’s big mouth
Analysts couldn’t care less about financial forecasts and official press releases. When it came to this week’s Federal Reserve statements, every eye was on Bernanke’s Q&A session. Here, the man behind the money would be forced to leave his script and give off-the-cuff remarks to potentially revealing questions.

Did Ben burst into tears? Did he hint that his heyday was over? Did he recommend Bitcoins? Hardly. But he did make mention of a potential end: “In the next few meetings, we could take a step down in our pace of purchases” of mortgage-backed securities and long-term Treasuries.

That statement was enough to send bears roaring to the market. The Dow Jones Industrial Average dropped 1.35%, while the S&P 500 slumped 1.39% by the end of the day.

But in his hurry to readjust, Mr. Market may have lost its long-term focus. An equally important statement, and one that received little financial fanfare, went a little something like this:

To support continued progress toward maximum employment and price stability, the [Federal Open Market Committee] expects that a highly accommodative stance of monetary policy will remain appropriate for a considerable time after the asset purchase program ends and the economic recovery strengthens. In particular, the Committee decided to keep the target range for the federal funds rate at 0 to 1/4 percent and currently anticipates that this exceptionally low range for the federal funds rate will be appropriate at least as long as the unemployment rate remains above 6-1/2 percent.

Buybacks or not, the Fed is in it to win it and will keep its monetary policy in place as long as it takes for our economy to legitimately pull itself out of its recession rut. And while Mr. Market might’ve ignored this news, it creates a unique investing opportunity for long-term investors.

Take a walk down market memory lane
The last time the U.S. unemployment rate dropped from 7.6% (our current rate) to 6.5% (the Fed’s point of retreat) was between September 1992 and December 1993. In that 15-month period, the Dow Jones increased 14.9%, the S&P 500 soared 16.4%, and Michael Jordan scored his 20,000th career point. Not a bad year for positive numbers. But some of our most beloved blue chips headed even higher. 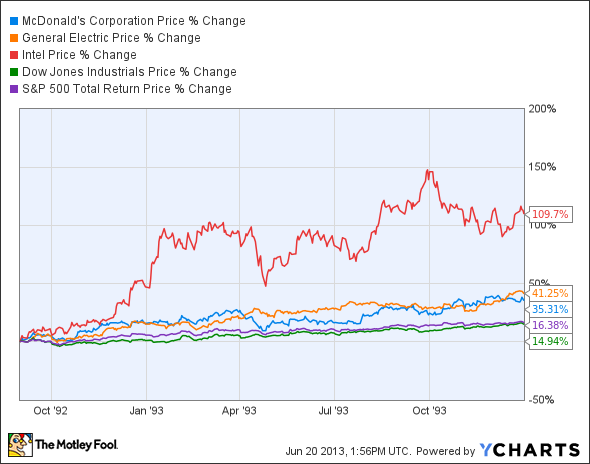 What happened in 1992 and 1993 was no financial fluke. Unemployment rates are a crucial economic indicator, and the Federal Reserve’s recent statements underline that fact. As short-term Wall Street investors pocketed their profits and walked away from Wednesday’s market, long-term investors know there’s a lot more in store.