McDonald’s Corporation (NYSE:MCD) Mighty Wings are officially out. Not surprisingly, the wing’s release coincided with the NFL season kickoff. Considering wings account for 39% of Buffalo Wild Wings (NASDAQ:BWLD)’ sales, and football season is its biggest time of year, some investors worry that B-Wild’s revenue could take a hit from the new competition.

To illustrate the “competition” between McDonald’s Corporation (NYSE:MCD) and Buffalo Wild Wings (NASDAQ:BWLD), we turn to Taco Bell and Chipotle Mexican Grill, Inc. (NYSE:CMG). Chipotle’s management never feared the Cantina Bell menu because it recognized the two companies’ customer bases are very different. It was confident that its customers would continue to come, and that’s exactly what happened. Cantina Bell was launched in July 2012. The chart below shows that while Chipotle’s stock price has been a roller coaster, revenue and net income have steadily climbed even with new competition, despite warnings from famous hedge fund manager David Einhorn. 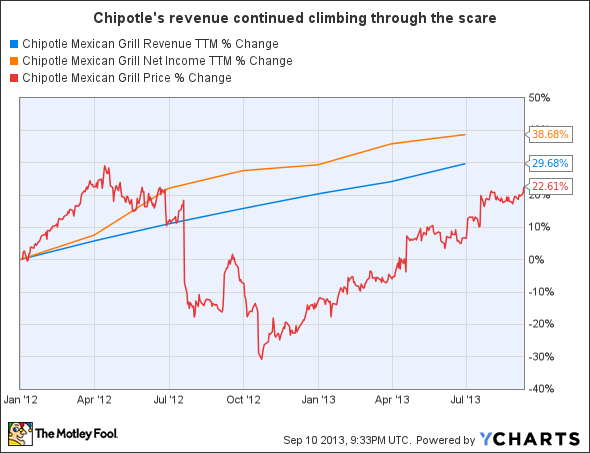 Revenue and earnings growth is primarily driven by new restaurant openings. But in the third quarter of 2012 — the first quarter with competition from Cantina Bell — comparable sales were unscathed, rising 4.8%. The stock dropped on fear, not financial metrics. As investors began to see that the threat of Taco Bell eating into Chipotle Mexican Grill, Inc. (NYSE:CMG)’s profits was unrealistic, the stock steadily recovered.

So, is Taco Bell’s Cantina Bell menu completely irrelevant? No way. It may not be a Chipotle-killer, but it’s one of the reasons Taco Bell has grown same-store sales for six consecutive quarters. Other factors include Doritos Locos Tacos and an upcoming breakfast launch. These initiatives are boosting Taco Bell’s numbers — a big deal for Yum! Brands, Inc. (NYSE:YUM) since Taco Bell currently accounts for 60% of Yum!’s US operating profit.

As for Chipotle Mexican Grill, Inc. (NYSE:CMG), I’m thinking investors will think twice before doubting this story again. Last quarter revenue was up 18% year over year, earnings per share were up 10%, and comp-sales were up 5.5%. It also expects to open around 180 locations this year. These aren’t signs of a company folding from fast food competition.

Returning to Buffalo Wild Wings (NASDAQ:BWLD), there is no realistic chance of Mighty Wings stealing away customers. The two companies have very different customer bases. Consider that the majority of B-Wilds’ customers go for more than just the wings. They go for the big-screens, the environment, and beer — things that McDonald’s Corporation (NYSE:MCD) can’t offer them.

However, I do believe the publicity these wings are getting will help boost McDonald’s Corporation (NYSE:MCD) comp-sales next quarter — something this company desperately needs. First quarter this year, comp-sales were down 1.2%. Last quarter comp-sales were up just 1%. McDonald’s is hoping for a bigger boost than that, and by offering chicken wings during football season it has a decent chance.

Wendy’s vs all other burger joints?

Burger chain The Wendy’s Company (NASDAQ:WEN) decided to emulate fast casual as well when it revamped its menu in 2009. New fast-casual burger chains like Five Guys and Smashburger are offering more artisan menu items, and the public is crazy for them.