McDonald’s Corporation (NYSE:MCD) same store sales have slowed in The United States. Some of that stems from increased competition and some from a still languishing economy. However, the company isn’t sitting still, with Bloomberg reporting that a major menu overhaul could be in the cards. That should make shareholders happy.

Bloomberg notes that McDonald’s Corporation (NYSE:MCD)’s menu has grown from 85 choices in 2007 to almost 150 today. With so many choices, Bloomberg contends, the company’s fast food model has become stressed, leading to slower service. Not to mention that too many choices leads to confusion on the customer side.

While the menu has increased in size, however, it’s important to remember that more options helped drive a run of success. Indeed, a stale menu can lead customers to try other food outlets. A constant stream of fresh, new items keeps customers coming back for more. That’s why chains from McDonald’s Corporation (NYSE:MCD) to Burger King Worldwide Inc (NYSE:BKW) have focused on livening up their menus.

The problem, however, may not be bringing out too many new items, but how long a new menu item lives on. The Wendy’s Company (NASDAQ:WEN) benefited for years from bringing out a spicy chicken sandwich for short periods of time. McDonald’s Corporation (NYSE:MCD)’s menu items often come in and stick around for a long time. Thus, menu bloat.

Of course Wendy’s has been through a disastrous string of mergers and spin offs that have left the company’s image tarnished. Its shares, meanwhile, are hovering in the single digits. Still a core menu supplemented by short-lived special items is a classic way to keep a menu fresh and keep it pared down. The Wendy’s Company (NASDAQ:WEN)’s recent problems weren’t so much caused by its menu as it was by corporate actions.

The logic of a pared down menu is taken to the extreme at Chipotle Mexican Grill, Inc. (NYSE:CMG). This concept was once controlled by none other than McDonald’s Corporation (NYSE:MCD). Although Chipotle has a long list of fresh items to put into each meal it creates, the list of dishes is limited to just a handful. That allows the made fresh in front of you concept to work, since the assembly line would bog down if there were too many choices available.

Small is Better or New is Better

Interestingly, The Wendy’s Company (NASDAQ:WEN) has always tried to differentiate itself on quality. That became harder as fast-casual restaurants like Chipotle Mexican Grill, Inc. (NYSE:CMG) started to pop up. The new brands, which include burger places, have stolen market share from fast food and casual restaurants as they have expanded. They have also made it harder for an old brand like Wendy’s to offer higher quality fare at higher price points.

Simple menued Chipotle has seen its shares run up almost 300% over the past five years. And, despite a big pull back in the middle of 2012, the stock has resumed its upward climb. However, the company’s trailing price to earnings ratio is around 40, which is high. So growth has to keep going if the shares are going to continue heading higher. As a new concept, new store openings can probably support that P/E. However, investors should be ready to jump ship once growth slows since the P/E is likely to compress quickly if customers grow tired of the Mexican themed chain. 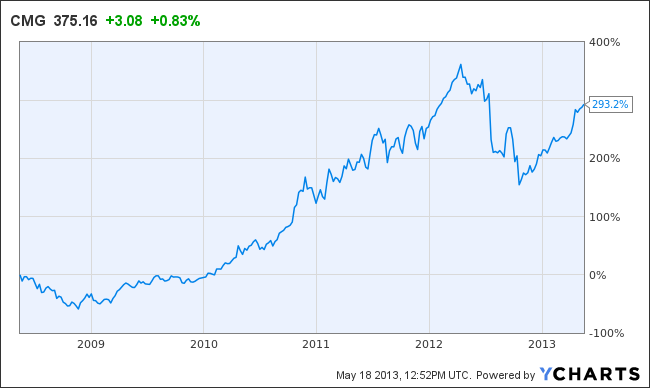