McDermott International (MDR): Are Hedge Funds Right About This Stock?

During the first half of the fourth quarter the Russell 2000 ETF (IWM) lagged the larger S&P 500 ETF (SPY) by about 4 percentage points as investors worried over the possible ramifications of rising interest rates. The hedge funds and institutional investors we track typically invest more in smaller-cap stocks than an average investor (i.e. only 298 S&P 500 constituents were among the 500 most popular stocks among hedge funds), and we have seen data that shows those funds paring back their overall exposure. Those funds cutting positions in small-caps is one reason why volatility has increased. In the following paragraphs, we take a closer look at what hedge funds and prominent investors think of McDermott International (NYSE:MDR) and see how the stock is affected by the recent hedge fund activity.

Is McDermott International (NYSE:MDR) ready to rally soon? The best stock pickers are taking a bullish view. The number of long hedge fund positions improved by 2 recently. Our calculations also showed that MDR isn’t among the 30 most popular stocks among hedge funds. MDR was in 24 hedge funds’ portfolios at the end of September. There were 22 hedge funds in our database with MDR positions at the end of the previous quarter.

At Q3’s end, a total of 24 of the hedge funds tracked by Insider Monkey were bullish on this stock, a change of 9% from the second quarter of 2018. Below, you can check out the change in hedge fund sentiment towards MDR over the last 13 quarters. With the smart money’s positions undergoing their usual ebb and flow, there exists a select group of notable hedge fund managers who were upping their holdings significantly (or already accumulated large positions). 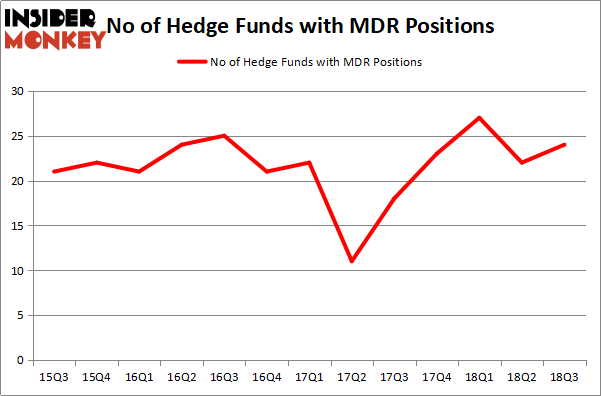 According to publicly available hedge fund and institutional investor holdings data compiled by Insider Monkey, Jonathan Barrett and Paul Segal’s Luminus Management has the biggest position in McDermott International (NYSE:MDR), worth close to $65.2 million, accounting for 1.3% of its total 13F portfolio. The second largest stake is held by Michael Blitzer of Kingstown Capital Management, with a $64.5 million position; the fund has 8.6% of its 13F portfolio invested in the stock. Remaining professional money managers that are bullish encompass Matthew Knauer and Mina Faltas’s Nokota Management, David Rosen’s Rubric Capital Management and Larry Foley and Paul Farrell’s Bronson Point Partners.

As aggregate interest increased, key money managers were breaking ground themselves. Arrowgrass Capital Partners, managed by Nick Niell, assembled the most outsized position in McDermott International (NYSE:MDR). Arrowgrass Capital Partners had $4 million invested in the company at the end of the quarter. Paul Tudor Jones’s Tudor Investment Corp also made a $0.7 million investment in the stock during the quarter. The following funds were also among the new MDR investors: Dmitry Balyasny’s Balyasny Asset Management and George Zweig, Shane Haas and Ravi Chander’s Signition LP.

As you can see these stocks had an average of 11.75 hedge funds with bullish positions and the average amount invested in these stocks was $182 million. That figure was $323 million in MDR’s case. Avista Corp (NYSE:AVA) is the most popular stock in this table. On the other hand Nuveen AMT-Free Quality Municipal Income Fund (NYSE:NEA) is the least popular one with only 3 bullish hedge fund positions. Compared to these stocks McDermott International (NYSE:MDR) is more popular among hedge funds. Considering that hedge funds are fond of this stock in relation to its market cap peers, it may be a good idea to analyze it in detail and potentially include it in your portfolio.