If there were a stock market in 400 B.C., Hippocrates might be plunking down a few Greek drachmas on spice king McCormick & Company, Incorporated (NYSE:MKC). The father of western medicine’s philosophy was, “Let your food be your medicine and your medicine be your food.” So, it seems likely he’d consider McCormick & Company, Incorporated (NYSE:MKC) not only a food industry play, but also a health and wellness one.

Spices as the next wellness frontier

There’s a renewed interest in Hippocrates’ not long ago derided philosophy, which has resulted in huge growth in organic foods and vitamin and mineral supplements. These trends have made a long-term winner out of Whole Foods Market, Inc. (NASDAQ:WFM), and a winner since its IPO out of General Nutrition Centers, up 153% in two years. 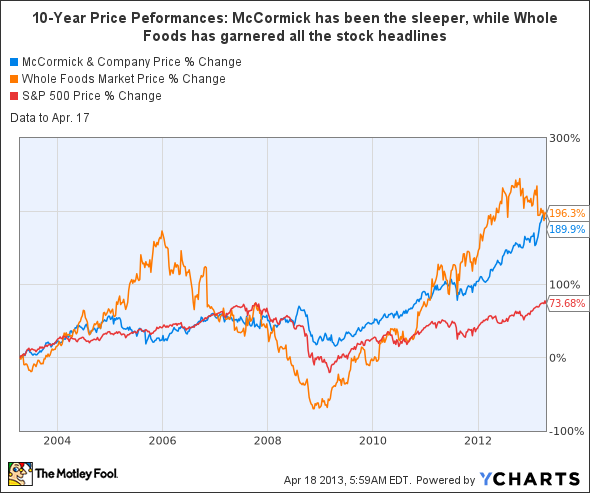 I think spices are the next wellness frontier, as many have reputed (and documented, in some cases) medicinal value.

The big opportunity is on the retail end because of its larger margins. Consumer awareness of the health benefits of some spices is increasing. It’s only a matter of time before more people start thinking of buying spices in the same way they do as buying vitamins and mineral supplements, and even considering them items in which to stock their medicine cabinets, not just their spice racks.

Let’s use a SWOT Analysis (Strengths, Weaknesses, Opportunities & Threats) to look at McCormick.

The company was founded in 1889, so its brand name has been embedded in the American consciousness for generations. While there are more herb and spice options now, McCormick was “it” for many people for generations. Many people stick with familiar products, a plus for McCormick.
(2) No. 1 Position
The $9.5 billion market cap company is the global leader in the manufacture and distribution of spices, herbs, seasonings and other flavors.
In 2012, the consumer business (retail) accounted for 60% of sales and 79% of operating income, and the industrial business (food manufacturers and food service) accounted for 40% of sales and 21% of operating income. Operating margins are considerably larger on the consumer end (18.9% vs. 7.6% in 2012). In 2012, revenue increased 8.6% and earnings-per-share increased 9%.
About half the company’s consumer business is spices, herbs and seasonings. In its primary markets, it has 40% to 60% market shares for these products. McCormick & Company, Incorporated (NYSE:MKC) makes money on other companies’ market shares, too, as it provides contract manufacturing services. It produces roughly half of store-brand spices, which can be a significant category for some products.

Competition is fractured. In the U.S., ACH Foods’ Spice Islands brand is a notable middle-market competitor. ACH is a subsidiary of the $22 billion market cap Associated British Foods plc (NASDAQOTH:ASBFY).

Given its size and No. 1 position, McCormick & Company, Incorporated (NYSE:MKC) has not had as many organic offerings as one might expect. However, a recent view of the company’s product line indicates the company has been beefing up its organic offerings.

There are trends other than heath and wellness that should benefit McCormick. These include:

The company’s annual report mentions the trend toward consumers exploring authentic ethnic cuisines, many of which contain more herbs and spices than so-called typical American fare.

McCormick is focused on growing its international business, particularly in the emerging markets. In 2012, the emerging markets accounted for 14% of revenue, which is double that of five years ago. McCormick & Company, Incorporated (NYSE:MKC)’s goal is to reach 20% by 2015. In China, revenue grew 23% in 2012, based largely on increased consumer demand (rather than price hikes).