The Dow Jones Industrial Average is well-known for its stability. The committee charged with making decisions about its makeup tends to be extremely conservative in implementing changes. Nevertheless, yesterday’s six-company switch in the Dow represented the average’s biggest shift since 2004, prompting investors to question whether the replacements really earned their place on the blue-chip index.

The addition of Visa Inc (NYSE:V) introduces a new element to the Dow. Although the average has had its fair share financial-industry stocks over the years, the way in which Visa makes money is fundamentally different from how banks and more traditional financial institutions earn profit. Moreover, with groundbreaking changes to the payment-processing business on the horizon, Visa Inc (NYSE:V) could look a lot different in the years and decades to come. Let’s take a closer look at the card company to see whether Visa Inc (NYSE:V) truly deserves to be in the Dow.

Credit without credit risk
The easiest way to tell that Visa Inc (NYSE:V) is different from most financial companies is to look at a chart of its performance during and since the financial crisis of five years ago. The card company certainly took its lumps along with most of the rest of the stock market, but in comparison to many of the banks that actually issue its cards, Visa Inc (NYSE:V) held up quite well and has posted strong gains during the ensuing recovery. 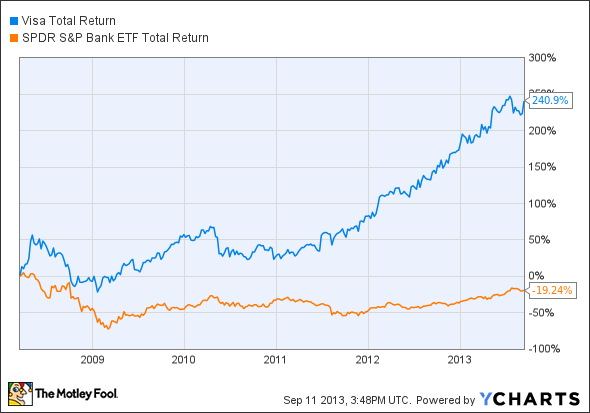 The reason is simple: Visa takes on no credit risk in facilitating card-based transactions. Bad lending practices and high default rates punished card-issuing banks during the crisis, but Visa Inc (NYSE:V)’s small cut that it collects through transaction-based merchant fees was never put at risk. The slowdown in spending activity during the recession hurt its transaction volumes, reducing its profit. But not having the potential for outright losses from operations gives Visa a fundamental business-model advantage over lending institutions.

Will Visa’s leadership last?
From an industry-leadership standpoint, Visa is the logical choice among card companies. According to Visa’s 2012 annual report, the card company had almost double the number of total cards issued that rival Mastercard Inc (NYSE:MA) offers, and both its payment volume and its total transaction volume have similar advantages. Moreover, Visa dwarfs current Dow member American Express Company (NYSE:AXP). Unlike Visa and Mastercard Inc (NYSE:MA), though, AmEx does issue its own cards and therefore does retain the credit exposure that produces so much of its profit.

The question, though, is whether Visa will keep its position atop the industry. Plastic is rapidly giving way to Internet- and mobile-based payment transactions as rival companies seek to provide secure and convenient ways to enable mobile devices to function as electronic wallets. In particular, payment systems from eBay Inc (NASDAQ:EBAY)‘s PayPal, which were initially designed to help facilitate auction- and marketplace-based purchase transactions for eBay customers, have been a high-growth profit center for eBay Inc (NASDAQ:EBAY). As PayPal has become more readily available as a brick-and-mortar payment option, the traditional lines between online and in-person transactions have started to blur.

Will Visa earn its place in the Dow?
Despite the competitive challenges, Visa has huge potential for growth, and investors expect the company to live up to its promise. With its huge share price giving it so much influence in the Dow, though, downside risk for Visa will have a potentially large impact on the average’s overall results if the company fails to stay ahead of its rivals in the payment-processing space. Still, if Visa can deliver on analyst expectations for earnings growth of almost 20% over the next several years, then it will have gone a long way toward demonstrating that it deserves its place within the Dow.

The article Does Visa Deserve to Be in the Dow? originally appeared on Fool.com and is written by Dan Caplinger.

Does Goldman Sachs Group Inc (GS) Deserve to Be in the Dow Jones Industrial...