Companies can hold onto, or grow, market share in their main segments in a number of ways, and help increase share prices in the process. Let’s see whether the following construction companies can grow by boosting their efficiency, accumulating enough cash and equivalents for buyouts, or creating a wide economic moat through strong relationships.

Masco’s efficiency efforts will begin to pay off

Masco Corporation (NYSE:MAS)‘s  main focus is on cabinets and related products, which account for 40% of the firm’s sales. However, the segment is only operating at half of the peak levels it reached before the recession, and its shares similarly trade around half of its all-time high, at $19 per share. Using this as a benchmark, it appears shareholders have the stock priced at about right.

However, it looks like investors have also considered the roughly $180 million the company has spent to increase efficiency — “rationalization costs,” in business-speak — in its cabinet business , which will potentially increase its profit margins.

In fact, Masco Corporation (NYSE:MAS) has spent about $240 million on rationalization costs in its overall business, with the cabinets segment accounting for 75% of those expenses. Like many proactive companies during the recession, Masco was able to dedicate its resources to optimizing its operations. Now that we are exiting the recession, investors will be able to see whether that initiative has paid off.

In the chart below, we can see where the company made considerable investments into improving its operations, causing spurts of losses. But the firm is back in the black, and its rationalization expenses are finished for the time being. If that money was spent wisely, profit margins should continue increasing. 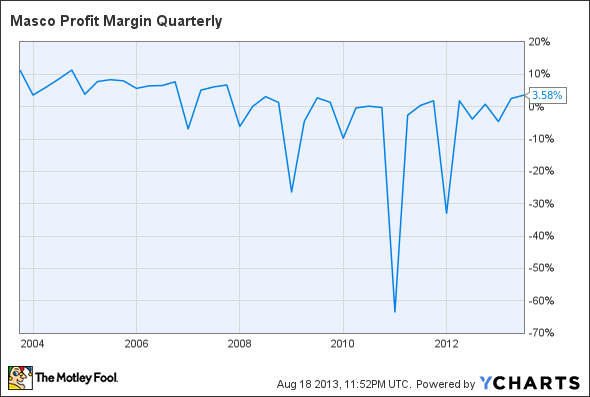 Owens Corning (NYSE:OC) is the maker of the Pink Panther insulation that is sold at Home Depot. Along with asphalt shingles, the insulation operation makes up the lion’s share of Owens’ total sales. In fact, Owens controls about 40% of the insulation market segment in the U.S. If Home Depot’s popularity keeps increasing, so could that market share.

But the company can’t rely on the success of one of its dealers. That’s why Owens Corning (NYSE:OC) needs to have a buyout capacity that will preserve and grow its market share. In a $2-billion-a-year industry, being able to buy other firms is almost always necessary. However, this company is nowhere near ready to preserve its market share (see chart below), and growth could be a long way off. 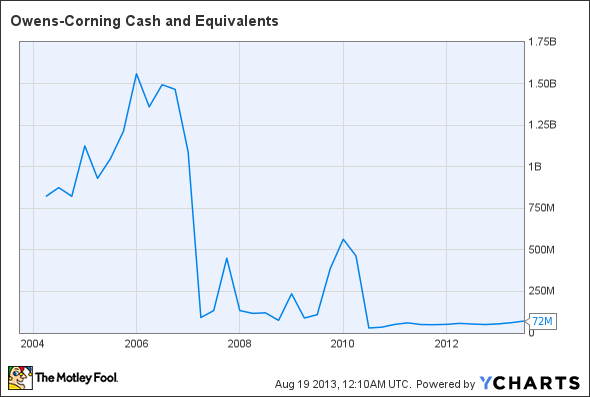 While cash and equivalents isn’t the only component that indicates whether a company is positioned to grow, it does give investors a good idea of what the firm is capable of. Owens Corning (NYSE:OC)’s free cash flow of $330 million last year makes me a bit more comfortable, but it likely needs that money to pay for a large annual chunks of its debt of $2.085 billion, as of last year. That large debt also tells me the company won’t likely be eager to expand by accumulating more debt.

Additionally, the above chart makes me uneasy, as it shows the company is like an all-star quarterback who has a broken arm and won’t be able to execute on the big play.

Furthermore, the firm’s price-to-book ratio is about on par with the industry average, and I agree with shareholders’ evaluation. While the company may seem powerful with its more than $5 billion in annual sales, its expenses are too high (including annual debt payments), causing this firm to keep very little of what it earns.