Masco Corporation (MAS): Are Hedge Funds Right About This Stock?

Is Masco Corporation (NYSE:MAS) a buy here? The smart money is getting more bullish. The number of long hedge fund bets advanced by 5 recently. Our calculations also showed that mas isn’t among the 30 most popular stocks among hedge funds. MAS was in 35 hedge funds’ portfolios at the end of the third quarter of 2018. There were 30 hedge funds in our database with MAS positions at the end of the previous quarter.

To the average investor there are many gauges shareholders have at their disposal to appraise publicly traded companies. Two of the less utilized gauges are hedge fund and insider trading sentiment. Our researchers have shown that, historically, those who follow the best picks of the best money managers can outperform their index-focused peers by a very impressive margin (see the details here).

At the end of the third quarter, a total of 35 of the hedge funds tracked by Insider Monkey held long positions in this stock, a change of 17% from the previous quarter. Below, you can check out the change in hedge fund sentiment towards MAS over the last 13 quarters. So, let’s find out which hedge funds were among the top holders of the stock and which hedge funds were making big moves. 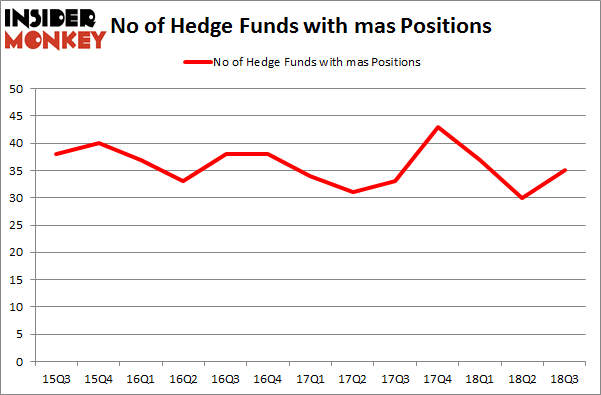 As aggregate interest increased, key money managers were leading the bulls’ herd. Nokota Management, managed by Matthew Knauer and Mina Faltas, created the most valuable call position in Masco Corporation (NYSE:MAS). Nokota Management had $9.2 million invested in the company at the end of the quarter. Israel Englander’s Millennium Management also made a $9.2 million investment in the stock during the quarter. The other funds with new positions in the stock are Matthew Tewksbury’s Stevens Capital Management, Clint Carlson’s Carlson Capital, and Andrew Feldstein and Stephen Siderow’s Blue Mountain Capital.

As you can see these stocks had an average of 26.5 hedge funds with bullish positions and the average amount invested in these stocks was $998 million. That figure was $1.07 billion in MAS’s case. Ally Financial Inc (NYSE:ALLY) is the most popular stock in this table. On the other hand Canopy Growth Corporation (NYSE:CGC) is the least popular one with only 16 bullish hedge fund positions. Masco Corporation (NYSE:MAS) is not the most popular stock in this group but hedge fund interest is still above average. This is a slightly positive signal but we’d rather spend our time researching stocks that hedge funds are piling on. In this regard ALLY might be a better candidate to consider a long position.