Appraising a company on the basis of a single earnings report could be misleading. Marathon Petroleum Corp (NYSE:MPC)‘s second-quarter results weren’t impressive as high crude oil costs weighed down on the nation’s fourth-largest refiner. However, if you intend to remain invested in this company for a long period, you could witness a solid return. The market’s current attitude toward this stock shouldn’t be a driving factor for your investment thesis.

Probing a little deeper, refining gross margin — which is a rough measure of a refiner’s profitability — fell almost 45% to $6.11 per barrel. Though this doesn’t come as a total surprise.

The apparent problem
Since March, the overall market has been developing cold feet toward refiners. As the price differential between the two most popular crude oil benchmarks — the internationally traded Brent and the domestic West Texas Intermediate — began to narrow, refining stocks started to slide.

Unlike last year, the outflow of crude oil to the Gulf Coast refineries from Cushing has been much more efficient in 2013. With fewer bottlenecks and higher takeaway capacity at the WTI storage hub, demand for the domestically sourced crude oil went up, which eventually wiped out the $20 per barrel discount against Brent crude. Here is a look at how Brent and WTI prices moved in the last 16 months:

From the above graph, it’s evident that refiners who had access to the cheaper WTI crude were at an obvious advantage. Along with Marathon Petroleum Corp (NYSE:MPC), some of the best performers last year were Western Refining, Inc. (NYSE:WNR) and HollyFrontier Corp (NYSE:HFC). For example, Western Refining’s El Paso refinery directly sources WTI Midland from the Permian Basin, a huge advantage. Back then WTI Midland was cheaper than WTI Cushing. HollyFrontier Corp (NYSE:HFC), on the other hand, enjoyed phenomenal refining gross margins at over $25 per barrel.

This year however, as WTI started costing more, things started looking less rosy. With refiners having to pay more for crude feedstock, refining margins declined. Since mid-March all independent refiners have underperformed the broader equity markets, but to varying degrees. Here’s a look at how the major refining stocks moved since mid-March as the Brent-WTI spread began to narrow: 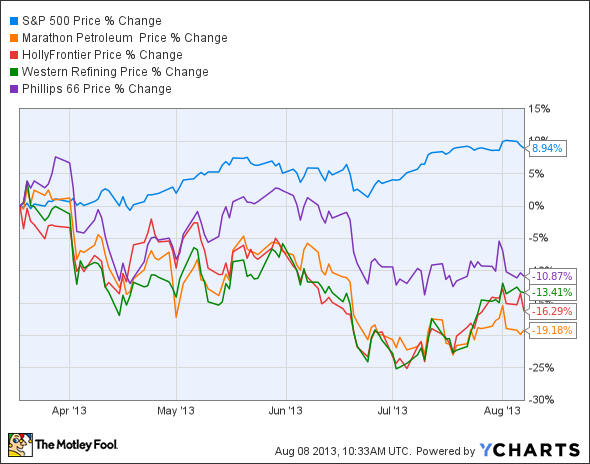 Evidently, refiners weren’t having the best of times. However, Marathon Petroleum Corp (NYSE:MPC) seems to have been punished more than the rest. The independent refiner lost almost 20% of its market value in the last five months. But digging deeper, things actually don’t look so bad for the nation’s third-largest independent refiner.

So why did gross margins drop? Split the costs involved in the refining and marketing segment: