MannKind Corporation (NASDAQ:MNKD) is scheduled to release data for two phase 3 trials of its inhaled insulin, Afrezza, this month.

Nothing is for certain in biotech, but it looks to me like the extended phase 3 program has an extremely high likelihood of coming up positive. I’ll be shocked if both trials don’t meet their endpoints.

Why the clinical trials will be positive
Simply put, there isn’t that much difference between the product MannKind Corporation (NASDAQ:MNKD) studied in its previous successful phase 3 trials and the device used in its current trials, Affinity 1 and Affinity 2.

The new inhaler, dubbed Dream Boat, is smaller than MedTone, but there’s little reason to think the underlying insulin will do anything differently once it enters the body.

Since the fasting lows aren’t nearly as low for patients taking Afrezza, patients can start with lower blood sugar levels. To produce parity, patients in the Affinity 1 trial are required to reduce their blood sugar level to a certain level before Afrezza or the rapid-acting insulin is tested.

If Afrezza can lower A1C levels more than injected insulins and/or produce fewer hypoglycemia events, it will make it much easier for MannKind Corporation (NASDAQ:MNKD) to take market share from NovoLog and Humalog.

The second trial, Affinity 2, compares Afrezza to placebo in type 2 diabetics who haven’t gone on insulin yet. We have less data on MannKind in this patient population, but the drug is being compared to placebo, so it shouldn’t be that hard to show insulin is capable of lowering blood glucose levels (that’s what it does naturally in those of us who don’t have diabetes).

All priced in
Despite the high likelihood of success, it’s hard to recommend buying MannKind Corporation (NASDAQ:MNKD) after the monster run it’s had this year. 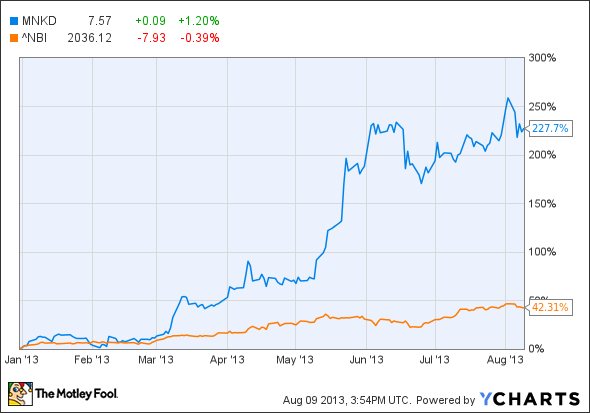 Getting positive clinical trial data is only the first step. For MannKind Corporation (NASDAQ:MNKD) to justify its $2 billion market cap, the biotech needs to get the drug approved, find a partner, and build a market for Afrezza. Those risks are covered further in a companion article this weekend.

The article The Easiest Prediction in Biotech This Summer originally appeared on Fool.com and is written by Brian Orelli.