Published on November 4, 2016 at 1:17 am by Insider Monkey Staff in Hedge Fund Analysis, Hedge Funds, News

The majority of hedge funds and other top money managers tend to have a long-term focus when they make investments. This means that retail investors can safely mimic the moves of these top investors, knowing that they haven’t missed the boat and missed out on the stock’s expected future gains. That’s why each quarter, we provide the latest ownership figures and trends among top investors, so that retail investors can judge which stocks may be primed for big future returns.

In this article we’ll take a look at the portfolio of Mitchell Blutt‘s Consonance Capital Management, which was one of the best performing funds in our database during the third quarter using our returns metric. Consonance Capital had ten long positions in stocks with a market cap of $1 billion as of June 30 and those stocks delivered weighted average returns of 32.3% during the third quarter, ranking it as the sixth-best performing hedge fund in our database during the quarter using that criteria. That performance helped turned around a disappointing year for the fund, which suffered big losses in the first quarter according to our returns metric.

It should be noted that the actual returns of the fund could be quite different than what we calculated, as not all of a hedge fund’s investments are necessarily reported on their Form 13F filings, including short positions, which are not required to be disclosed like long positions are. A fund’s long portfolio could also undergo changes throughout the quarter, while our returns are based on the positions as held on June 30. This is particularly true of Consonance Capital, as it tends to have a fairly high level of turnover in its healthcare-focused portfolio each quarter.

With that out of the way, let’s move on to checking out five of Consonance Capital’s favorite stocks as of June 30.

First up is Mallinckrodt PLC (NYSE:MNK), Consonance Capital’s top pick at the end of Q2, as it owned a $93.84 million position. Mallinckrodt turned in 15% returns during the third quarter but has given all of those back and more during the fourth quarter, which may not bode well for the fund depending on how it has played the stock in the second-half of the year. It was reported yesterday that Mallinckrodt PLC (NYSE:MNK) was considering making a bid for Depomed Inc (NASDAQ:DEPO) (which Consonance Capital is also a shareholder of), causing its shares to plummet by over 7% as the market clearly doesn’t think that Mallinckrodt has the balance sheet to justify even considering such a move.

As you can see in the chart below, hedge funds have been steadily getting out of Mallinckrodt over the last year. At Q2’s end, a total of 29 of the hedge funds tracked by Insider Monkey were long the stock, a 17% drop quarter-over-quarter. Paulson & Co, managed by John Paulson, holds the number one position in Mallinckrodt PLC (NYSE:MNK). Paulson & Co has a $508.8 million position in the stock, comprising 5.2% of its 13F portfolio. The second most bullish fund manager is Phill Gross and Robert Atchinson of Adage Capital Management, with a $177.6 million position. Some other peers that hold long positions consist of Ken Griffin’s Citadel Investment Group and Samuel Isaly’s OrbiMed Advisors. 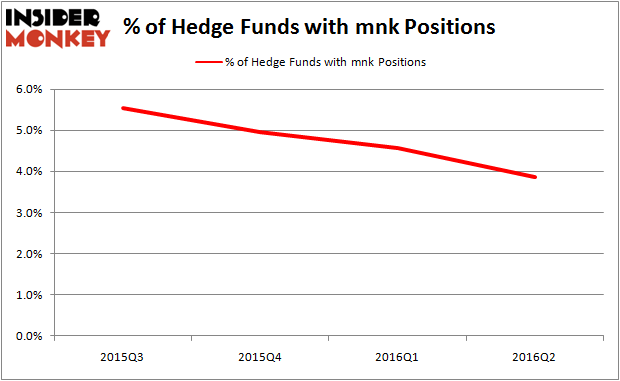 On the other hand, investors who are in the know are more optimistic about Ariad Pharmaceuticals, Inc. (NASDAQ:ARIA), which was in 27 hedge funds’ portfolios at the end of June, up by one quarter-over-quarter. Alex Denner’s Sarissa Capital Management, another top performing fund in the third quarter, had the biggest position in Ariad Pharmaceuticals, Inc. (NASDAQ:ARIA), worth close to $95 million, accounting for 27% of its total 13F portfolio, while Consonance Capital’s holding was the second-largest at a value of $65.4 million.

Ariad Pharmaceuticals, Inc. (NASDAQ:ARIA) shares gained over 85% during the third quarter, making it one of the best performing stocks during that period. However, it hasn’t been spared from the healthcare industry’s Q4 slide, as it’s given back a chunk of those gains. Deutsche Bank recently initiated coverage on Ariad with a ‘Hold’ rating.

We’ll check out three more stock picks of the high-flying Consonance Capital on the next page.