MAKO Surgical Corp. (NASDAQ:MAKO) sure has taken investors on quite the ride over the past year. The problem, however, is that the ride has looked more like a downhill ski run than anything else: 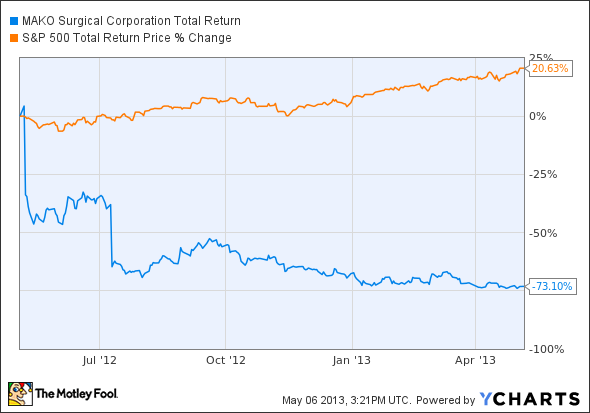 Of course, those massive drops last May and July were the direct result of two horrific quarters during which the robotic orthopedic surgery specialist badly missed RIO system sales estimates. As a consequence, management not only had to twice reduce sales guidance, but also faced a several lawsuits from shareholders alleging “misrepresentations and omissions” that they say may have artificially inflated the stock price.

And while MAKO Surgical Corp. (NASDAQ:MAKO) has only marginally underperformed the S&P 500 over the past five years, you can bet that many of those angry shareholders are the ones who purchased at the height of the excitement over the past couple of years as the company put up solid system sales numbers, boosted guidance, and announced a promising new total hip arthroplasty solution for its RIO platform: 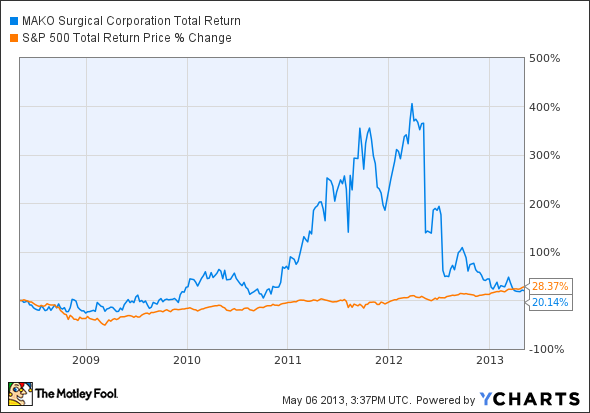 The stakes are high
But really, can you blame the market for getting a little overexcited? After all, the meteoric rise of MAKO Surgical Corp. (NASDAQ:MAKO)’s soft-tissue cousin Intuitive Surgical, Inc. (NASDAQ:ISRG) is still fresh on investors’ minds, and it hasn’t gone unnoticed both co-founders of Intuitive Surgical (Dr. Frederic Moll and Dr. John Freund) currently sit on MAKO Surgical Corp. (NASDAQ:MAKO)’s board of directors.

Look at what Intuitive Surgical, Inc. (NASDAQ:ISRG) did for early investors back then, using very much the same razor-and-blades model that MAKO currently utilizes: 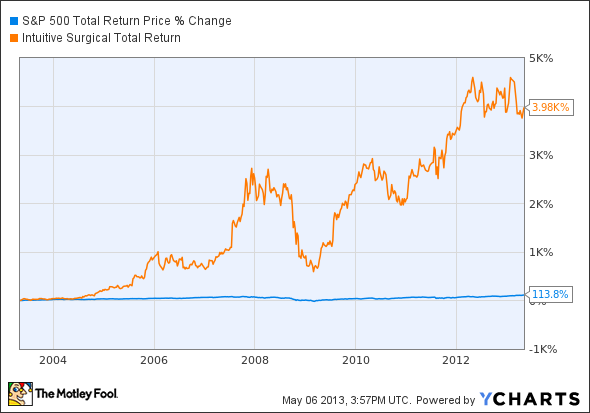 Then again, fellow Fool Dan Carroll did point out recently that MAKO now stands less as an explosive growth opportunity and more as a promising long-term play as the company inches toward profitability.

Sure enough, MAKO Surgical Corp. (NASDAQ:MAKO) had some explaining to do leading up to its most recent quarterly results, so I was relieved when the company provided answers to a few of the burning questions investors had posed, including providing reasonable procedure and system sales guidance, clarification on international opportunities, refreshed monthly utilization numbers, and hints on future new procedure types to expand MAKO’s surgery repertoire beyond partial knees and hips.

In addition, MAKO effectively neutralized two of its primary robotic competitors last month with the quick resolution of a pair of disputes, most notably culminating in its purchase of robotic business assets and intellectual property from U.K.-based Stanmore Implants.