Make 3.5 Percent In 3 Weeks By Shorting SPY With The Permabear Sentiment Index

We at Insider Monkey were quite surprised when we discovered that the Roubini Sentiment Indicator can be used to yield 1.6% over a short 3 week period. After a little research, we’ve discovered that the Permabear Sentiment Index can be used to make an enormous 3.5% over the same 3 week period. Roubini has been a terrible forecaster for the past 18 months; nearly none of his predictions came true. The Roubini Sentiment Indicator, on the other hand, works magnificently. The reason is that it’s a proxy for the media’s and investors’ pessimism. Whenever media members feel pessimistic about the market, they write articles which cite permabears or they produce TV shows and invite Roubini. This in turn affects investors’ psychology and starts a chain reaction that leads to lower stock market returns in the following week or two. Since Roubini is just the permabear flavor of the day and is losing his media cachet slowly but steadily, we decided to expand the list and build a Permabear Sentiment Indicator. Composite indicators usually perform better on the average and they are usually more robust. James Surowiecki used this concept and wrote the “Wisdom of Crowds”. 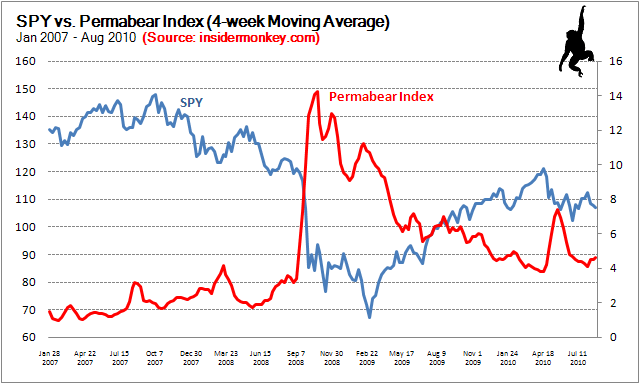 Here is how we constructed this brilliant index:

In addition to Nouriel Roubini, we included the other big permabears: Peter Schiff, Marc Faber and Nassim Taleb. Peter Schiff started to become popular during the summer of 2007. Even though his peak popularity was not as high as Roubini’s, today he’s more popular than is Roubini. Marc Faber has been around for a very long time; there’s no need to introduce him. His current popularity is about one third less than Roubini’s. Finally our fourth permabear is black swan Nassim Taleb, who is only 25% as popular as Roubini, on the average. There are other permabears (i.e Robert Prechter, Michael Panzner) but their popularity is nowhere near these four permabears and including them will not affect our conclusions in any meaningful way. 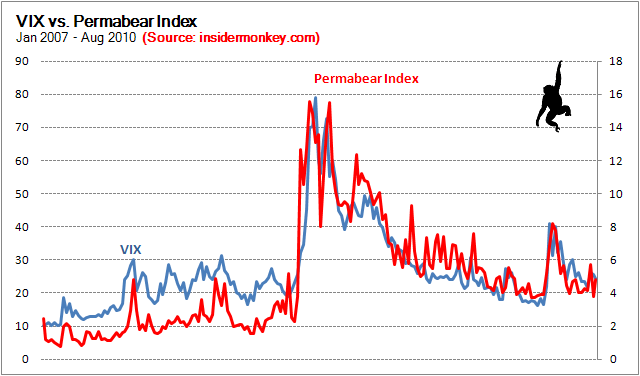 If we short the SPY when the Permabear Sentiment Index is 25% more than its 4-week average, we will make a whopping 3.5% over the following three week period. This indicator would have predicted the 2008 stock market crash, for example. It would have been short going into the crash, and it would have taken additional shorts as the SPY fell from 120 to 84 in the following weeks.