While many airline stocks performed well in 2012, their performance over the past three months has been nothing short of extraordinary. Since early December, the five largest U.S. airlines (excluding American, which is currently in bankruptcy) have seen their share prices appreciate by more than 30% on average. 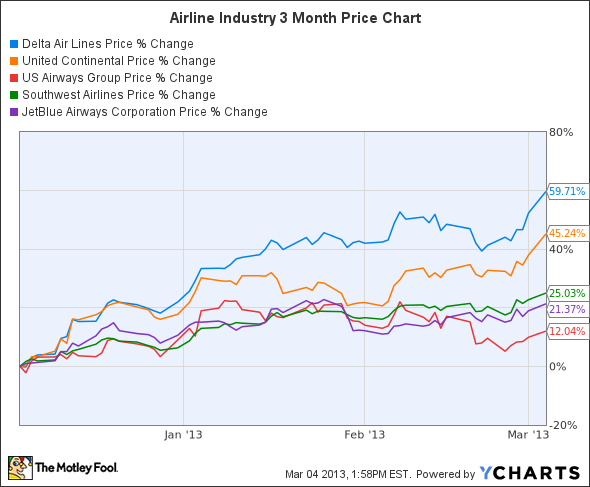 The biggest carriers, Delta Air Lines, Inc. (NYSE:DAL) and United Continental Holdings Inc (NYSE:UAL), have shown the strongest performance, gaining 60% and 45%, respectively, over that time period. Low-cost carriers Southwest Airlines Co. (NYSE:LUV) and JetBlue Airways Corporation (NASDAQ:JBLU) have each gained more than 20%, while US Airways Group, Inc. (NYSE:LCC) stock price has taken a bit of a breather after tripling in the previous year.

Airline stocks may be flying high now, but this performance is not necessarily supported by the fundamentals. While some companies like Delta Air Lines, Inc. (NYSE:DAL) and US Airways Group, Inc. (NYSE:LCC) have posted consistently strong results recently, others have lagged. United Continental and Southwest have both been hampered by merger integration problems and have not yet generated any meaningful “revenue synergies.” Meanwhile, JetBlue is starting to regain its momentum after seeing Hurricane Sandy eat into revenue and earnings.

Owning the strongest airline stocks is probably the best decision now, as is often the case. At some point, there will likely be an industry correction, but Delta Air Lines, Inc. (NYSE:DAL) and (to a lesser extent) US Airways may be more insulated from such volatility than peers. Both companies still trade at attractive valuations (five to six times expected 2013 earnings) and have been increasing their profit margins recently. By contrast, the share prices for Southwest and United Continental seem to be running ahead of the fundamentals: Continued disappointments could lead to a quick reversal in either case.

The merger catalyst
One major cause of the recent airline stock run was growing speculation that US Airways Group, Inc. (NYSE:LCC) would merge with American Airlines. US Airways had been publicly pursuing American since early 2012, but it was only recently that American’s management team warmed to the idea. The merger was ultimately announced on Feb. 14, but the decision was widely expected by then. In the week before the announcement, I wrote that US Airways and American Airlines shareholders were unlikely to profit from the merger (at least in the short term). Sure enough, US Airways shares have dropped by roughly 10% since the merger was announced, as investors have come to grips with the obstacles that lie ahead.

By contrast, other airlines held their ground or moved higher after the merger announcement, despite having already rallied on speculation that US Airways and American would indeed merge. Some airlines may indeed see benefits: for example, JetBlue CEO Dave Barger recently stated that he believes JetBlue will be able to expand its partnership with American Airlines later this year. By allowing more passengers to connect seamlessly between the two airlines at JFK, both companies should benefit.