Macy’s, Inc. (NYSE:M)  is quite the resilient apparel retailer. Part of its industry out-performance is related to the company’s affluent customer base. Generally, the income level for Macy’s customers is above that of many other department stores. Even still, one investor’s fear for Macy’s is that same-store sales will eventually have to slow, after growing nearly 5% yearly since 2010.

But never fear, the company continues to reinvest in its brand, including introducing active apparel via an alliance with Finish Line Inc (NASDAQ:FINL). Also, Macy’s is looking to focus on its omni-channel, which should help avoid markdowns, increase inventory turnover, and increase sales follow-through.

Thanks to Macy’s, Inc. (NYSE:M) continued strong earnings performance and growth in comp sales, the retailer has managed to outperform some of the other major department retailers over the past five years. Also, notice how it’s Macy’s and Nordstrom, Inc. (NYSE:JWN), the higher-end retailers, that have held up much better than either Kohl’s Corporation (NYSE:KSS) and Saks Inc (NYSE:SKS). 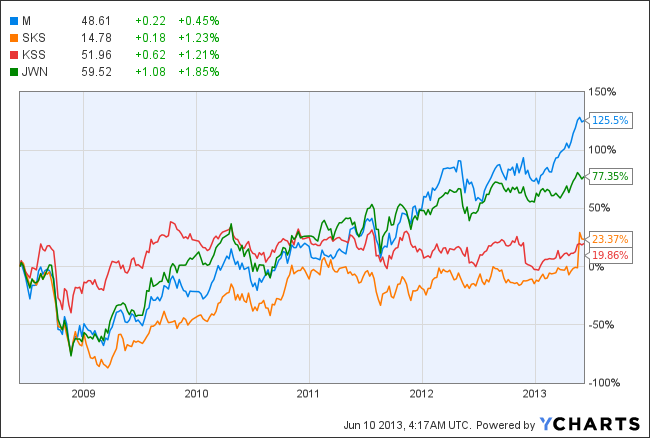 Macy’s also pays a sometimes overlooked 2% dividend yield that’s only a 30% payout of earnings. The retailer was impressive at generating and utilizing cash flow throughout the recession. Macy’s managed to de-leverage its balance sheet from a debt-to-EBITDA ratio of 4.0 in fiscal 2008 to 2.4 in 2012.

Also, during fiscal 1Q 2013, Macy’s, Inc. (NYSE:M) upped its quarterly dividend by 25% and increased its share-repurchase authorization by $1.5 billion. Since mid-2011, Macy’s has repurchased some 60 million shares worth $2.2 billion.

Nordstrom, Inc. (NYSE:JWN), in some cases considered even higher-end than Macy’s, is expected to experience revenue growth of 5.8% in fiscal 2013 driven by an impressive 4.4% growth in same-store sales. Nordstrom managed to post 1Q EPS of $0.73, not a stellar improvement from the $0.70 in the same quarter last year. However, this did come on the back of 4.8% higher total sales.

Going forward, Nordstrom is hoping that store openings will drive revenue. Nordstrom plans to nearly double its opening of new Rack stores from the current 125 stores to more than 230 locations by 2016. As well, the retailer has plans to break into New York and the Canadian markets.