The 700+ hedge funds and money managers tracked by Insider Monkey have already compiled and submitted their 13F filings for the second quarter, which unveil their equity positions as of September 30. We went through these filings, fixed typos and other more significant errors and identified the changes in hedge fund positions. Our extensive review of these public filings is finally over, so this article is set to reveal the smart money sentiment towards Lumber Liquidators Holdings Inc (NYSE:LL).

Hedge fund interest in Lumber Liquidators Holdings Inc (NYSE:LL) shares was flat at the end of last quarter. This is usually a negative indicator. The level and the change in hedge fund popularity aren’t the only variables you need to analyze to decipher hedge funds’ perspectives. A stock may witness a boost in popularity but it may still be less popular than similarly priced stocks. That’s why at the end of this article we will examine companies such as MFS Intermediate Income Trust (NYSE:MIN), A10 Networks Inc (NYSE:ATEN), and CAI International Inc (NYSE:CAI) to gather more data points.

What have hedge funds been doing with Lumber Liquidators Holdings Inc (NYSE:LL)? 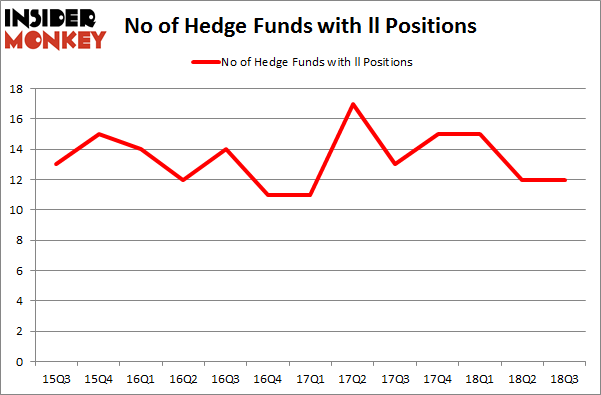 Judging by the fact that Lumber Liquidators Holdings Inc (NYSE:LL) has witnessed a decline in interest from the smart money, it’s safe to say that there is a sect of fund managers that slashed their full holdings last quarter. It’s worth mentioning that Ken Grossman and Glen Schneider’s SG Capital Management dumped the largest investment of the “upper crust” of funds watched by Insider Monkey, comprising an estimated $22.9 million in call options, and Dmitry Balyasny’s Balyasny Asset Management was right behind this move, as the fund dumped about $6.5 million worth. These moves are important to note, as aggregate hedge fund interest stayed the same (this is a bearish signal in our experience).

As you can see these stocks had an average of 9.25 hedge funds with bullish positions and the average amount invested in these stocks was $49 million. That figure was $26 million in LL’s case. A10 Networks Inc (NYSE:ATEN) is the most popular stock in this table. On the other hand MFS Intermediate Income Trust (NYSE:MIN) is the least popular one with only 2 bullish hedge fund positions. Lumber Liquidators Holdings Inc (NYSE:LL) is not the most popular stock in this group but hedge fund interest is still above average. This is a slightly positive signal but we’d rather spend our time researching stocks that hedge funds are piling on. In this regard ATEN might be a better candidate to consider a long position.