It could have been a disaster. A company that makes yoga apparel sells pants that are too sheer when you bend over. Do customers flee? Does the press grab a hold of the story and not let go? Will the company try to cover it instead of addressing the issue?

The answer to all of these is “no.” Lululemon Athletica inc. (NASDAQ:LULU) had a problem. While the company continued to grow rapidly, it found that its yoga pants sold recently were too sheer and had to be recalled. Obviously, this impacts their bottom line in the short-term. But more importantly, Lululemon Athletica inc. (NASDAQ:LULU) quickly put out the fire by owning up to the problem. No excuses.

The company apologized for not meeting their usual quality standards, recalled the product, and said that they would fix the problem. They didn’t let someone else tell the story. They didn’t let it drag on while deliberating what to do. Apologize up front, take the product back, and fix it. Sounds so simple, but many companies fail to do this. Lululemon Athletica inc. (NASDAQ:LULU) nailed it, and gave investors a great buying opportunity as a result.

When Lululemon announced the product recall over a month ago, the stock dropped as you would expect any time there will be a negative impact to earnings. However, if you haven’t been watching Lululemon Athletica inc. (NASDAQ:LULU)’s stock closely since then, you missed the fact that shares have steadily risen since that drop. 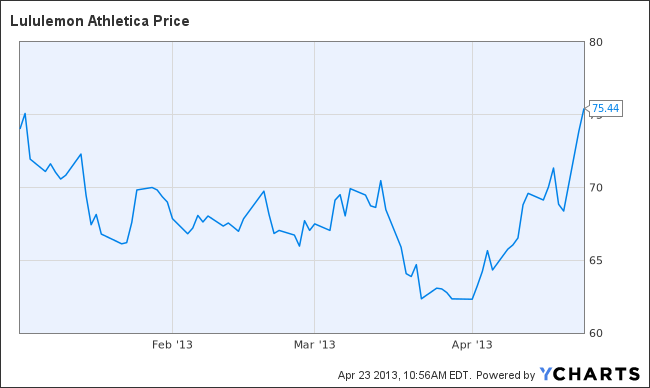 In fact, its most recent sharp increase has brought it close to where it started 2013. That’s not much to celebrate about given that the S&P 500 is up substantially in 2013. But it begs the question: is Lululemon Athletica inc. (NASDAQ:LULU) undervalued?

At a basic level, the company’s Price-to-Earnings ratio divided by its growth rate (PEG ratio) needs to be at a reasonable level, with “reasonable” being a relative concept. Investors typically allow for a higher PEG ratio for faster growth companies, sometimes 1.5x-2.0x, simply because of the growth that the company provides always allowing for the P/E ratio to catch-up. In Lululemon’s case, the PEG ratio is 1.2, which isn’t super cheap, but certainly not outrageous. The sell-off back in March would have provided you with a PEG less than 1, but unfortunately, that opportunity has passed. 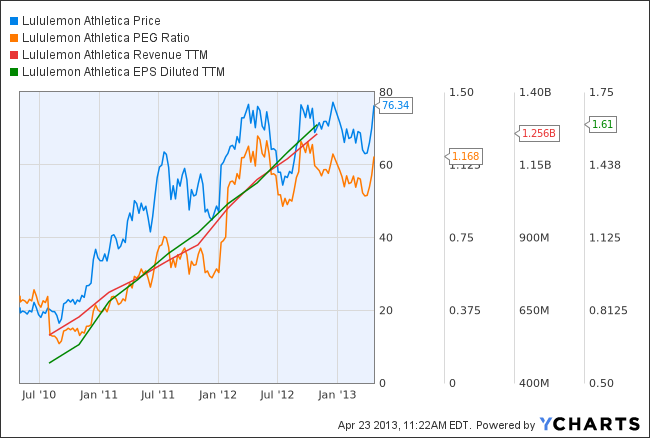 What makes the 1.2 PEG ratio acceptable to many investors is Lululemon’s exceptional history of growth in both revenue and earnings per share (EPS). The chart above shows how much both have soared over the past couple of years. With the company also generating solid cash flow from operations along the way, there’s not much to dislike about the growth Lululemon has provided. The stock has almost quadrupled over the past three years.