Lululemon Athletica inc. (LULU): Does This Retailer Need to Grow Up?

In business, there’s a distinction between a company that is quirky and one that is utterly foolish. These days, yoga apparel retailer Lululemon Athletica inc. (NASDAQ:LULU) is increasingly looking like the latter. The company’s quality control issues, the abrupt departures of its chief product officer and CEO, and its unclear vision for the future all indicate that Lululemon is a company that’s not ready to grow up yet.

Former CEO Christine Day, who joined Lululemon Athletica inc. (NASDAQ:LULU) in 2008, abruptly resigned on June 11. Prior to joining Lululemon, Day was the head of Starbucks Corporation (NASDAQ:SBUX)’ Asia division. During her tenure, Lululemon’s annual revenue quadrupled to $1.37 billion, as it grew from a niche brand into a nationally recognized one. 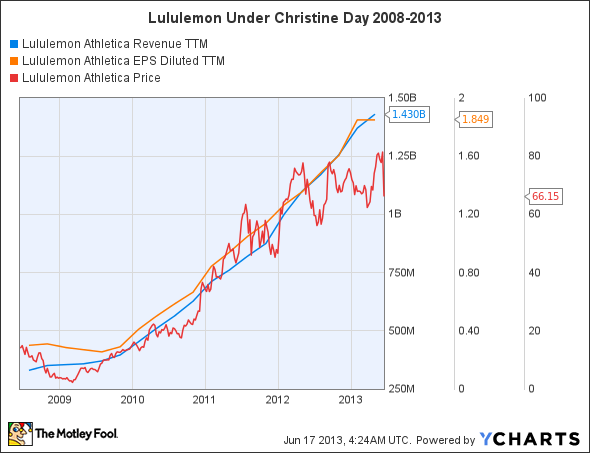 However, that rapid growth came at a price. In 2010, Lululemon Athletica inc. (NASDAQ:LULU) recalled its reusable shopping bags after tests revealed that they contained lead. Last September, it experienced problems with color bleeding in its swimwear and pants. Then in March, its black luon (a proprietary Lululemon fabric) yoga pants were recalled for being too sheer. These quality control issues led to the resignation of its chief product officer, Sheree Waterson, in April. However, many of the company’s fans blamed Day for expanding the company too quickly, which led to the loss of control over its outsourced supply chain.

Although Day’s departure was celebrated by some of Lululemon Athletica inc. (NASDAQ:LULU)’s fans, who considered her aggressive expansion to have decreased the overall quality of its clothes, investors completely disagreed. Shares of Lululemon plunged 15% after Day’s resignation. For many investors and analysts, Day was the guiding force behind Lululemon’s impressive growth, and the rapid expansion was necessary to justify Lululemon’s premium valuation. Even after its precipitous decline, the stock still trades with a P/E of 36.

Lululemon Athletica inc. (NASDAQ:LULU), which now lacks a permanent CEO, should be reassuring its investors with a clearer plan for its future. Instead, Lululemon has addressed Day’s resignation with a joke, launching a fake job posting on its website, reading, “CEO Wanted.” The tongue-in-cheek ad asks for potential applicants to be able to speak Sanskrit, do headstands for at least ten minutes, and to have Ellen DeGeneres on speed dial.

While that goofy ad is obviously a way for Lululemon Athletica inc. (NASDAQ:LULU) to garner free publicity from the media and make fun of itself over its current troubles, it comes off as disrespectful to the outgoing CEO as well as investors, who just had to endure a punishing week of losses. It’s a symptom of Lululemon’s big problem – it’s a company that doesn’t want to grow up, despite being aggressively challenged by two of the biggest names in retail – Nike, Inc. (NYSE:NKE) and The Gap Inc. (NYSE:GPS).

It’s time to grow up

Although Lululemon has a relatively small footprint of 201 brick-and-mortar stores, its solid reputation has put it on the same page as these retail giants. Lululemon’s original strength was its unique store model – it offered free yoga classes to customers through an attached studio, and used word of mouth advertising, rather than heavy marketing expenses, to grow its presence from its first store in Vancouver to the rest of Canada, the United States, Australia and New Zealand.

Prior to Lululemon Athletica inc. (NASDAQ:LULU)’s rise, no retailer considered yoga apparel to be a growth market – it was a niche one at best. However, Lululemon’s success has shown other retailers that yoga apparel might be the magic formula to sell athletic apparel to women.

NIKE, Inc. (NYSE:NKE) has increased its yoga apparel offerings significantly over the past year, and generally sells its products at 20% to 30% less than comparable Lululemon products. Nike has also created a line of yoga footwear, Nike Studio Wrap, aimed at women who do yoga and pilates. The Studio Wrap isn’t cheap at $110, and seems like a superfluous product for exercises that women usually do barefoot, but it has been met with positive reviews.

Gap, on the other hand, is an even bigger threat to Lululemon. Its Athleta yoga apparel brand, which was originally launched as an online retailer in 2009, has since expanded into a brick-and-mortar one. The Gap Inc. (NYSE:GPS) intends to open 50 new Athleta brick-and-mortar stores by the end of the year. Through Athleta, Gap has cloned Lululemon’s business model of offering free yoga classes at an attached studio, and has even reportedly poached Lululemon’s yoga instructors with higher product discounts.

The problem is Lululemon Athletica inc. (NASDAQ:LULU)’s lack of a defensive moat against these threats. Its margins will be squeezed hard if it has to compete with NIKE, Inc. (NYSE:NKE) and The Gap Inc. (NYSE:GPS) on an even price basis, which may lead to more quality control issues. Lululemon’s products and services are also looking less unique by the day, as its customers start to see competing combination shops and studios pop up across the country.