A SWOT analysis is a look at a company’s strengths, weaknesses, opportunities, and threats, and is a tremendous way to gain a detailed and thorough perspective on a company and its future. As 2013  begins, I would like to focus on a leading home improvement retailer: Lowe’s Companies, Inc. (NYSE:LOW).

1). Solid Revenue Growth: In 2007, Lowe’s reported revenue of $46.93 billion; in 2012, the company announced revenue of $50.21 billion, representing year over year annual growth of 1.36%, a trend that is anticipated to accelerate into the future with projections placing 2017 revenue at $58.55 billion.  This growth has been a result of the economic recovery in the United States and a revival of consumer and homebuilding spending

2). Institutional Vote of Confidence: 77% of shares outstanding are held by institutional investors, displaying the confidence some of the largest investors in the world have in the company and its future

3). Reasonable Valuation: At the moment, Lowe’s carries a price to earnings ratio of 22.95, a price to book ratio of 2.89, and a price to sales ratio of 0.86, all of which indicate a company trading with a fairly reasonable valuation when growth and future prospects are taken into account

4). Dividend: Currently, the company pays out quarterly dividends of $0.16, which when annualized puts the dividend as yielding 1.66%, an upside to the business

5). Historical Margin Expansion: Historically speaking, since 1980 Lowe’s gross profit has grown 11.79k%, while revenue has only grown 6.23k%, which represents margin expansion, an extremely beneficial aspect to the company

6). Strong Correlation with Accelerating Housing Market: Lowe’s sales growth is highly linked to the housing market, as a great portion of their revenue is derived from housing and building materials, and recently the housing market has accelerated in its recovery, which should greatly benefit Lowe’s 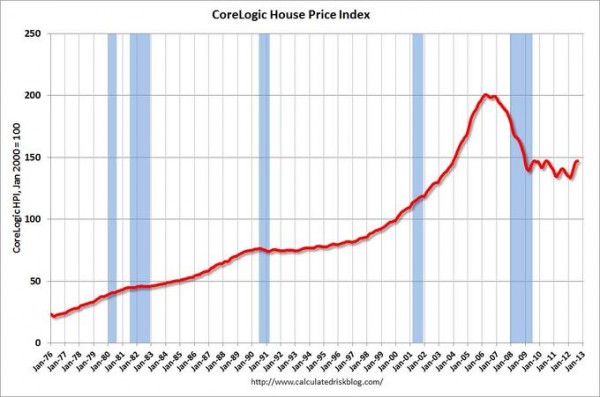 1). Net Debt: Despite possessing $1.66 billion of cash, cash equivalents, and short and long-term investments on their balance sheets, Lowe’s $14.5 billion debt load results in a net debt of $12.84 billion, a major downside to the business

2). Single Digit Margin: Because of the extremely competitive nature of Lowe’s industry, the company carries a net profit margin of 3.63%, which leaves very little room for any unexpected expenditures

4). Extreme Cyclical Nature: Lowe’s success is incredibly correlated to overall economic activity, and in past recessions in the United States Lowe’s has greatly suffered.  This extreme cyclical nature of their business could prove to be a weakness in economic downfalls

2). Growth in Core Markets: Any growth in Lowe’s core markets would significantly help the company and spur growth

3). Geographical Expansion: 98.11% of Lowe’s total stores are located in the United States, leaving plenty of room for geographical expansion, which is widely anticipated to occur into the future, with industry analysts’ projections placing the number of international Lowe’s stores by 2019 at 115

4). Dividend Growth: Since implementing their dividend program in 1961 the company has consistently raised its dividend payouts, and should continue to do so into the future as revenue increases and the company currently only possesses a dividend payout ratio of 37.1% 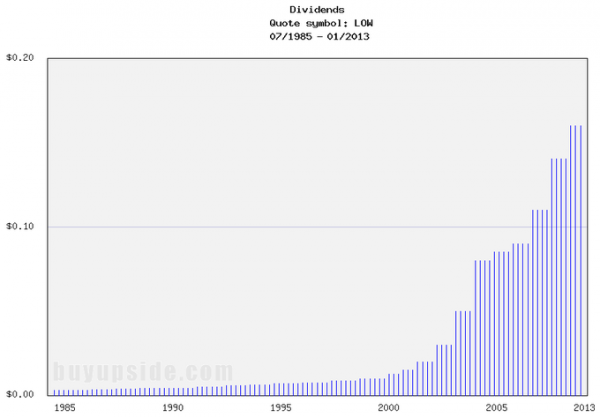