Billionaire Bill Ackman, manager of Pershing Square, in a recently published 2018 Annual Letter shared his professional analysis of Lowe’s Companies, Inc. (NYSE:LOW). You can download a copy of the letter – here. Among other things, Bill Ackman stated that he has faith in a newly chosen CEO, Marvin Ellison, believing he will guide Lowe’s towards achieving its full potential. Bill Ackman thinks that the company’s comprehensive upside potential lies in narrowing the performance gap with The Home Depot, Inc. (NYSE:HD). Here is what he said:

“Lowe’s Companies, Inc  (“LOW”)Lowe’s was one of four new investments in 2018. Lowe’s is a high-quality business led by a new, high-caliber management team that has committed to meaningfully narrowing the performance gap with its direct competitor, Home Depot. We initiated our investment after the company announced a CEO search process. In May, Lowe’s announced that Marvin Ellison, a former senior executive at Home Depot, would become CEO. We believe that Marvin has the relevant experience, leadership qualities and skill-set to allow Lowe’s to achieve its potential. Since Marvin started in July, he has assembled a new leadership team of seasoned executives, many of whom previously worked with him at Home Depot.

In December, management hosted an Analyst Day and outlined a credible plan to narrow the performance gap with Home Depot. Lowe’s strategy is centered around better execution of “retail fundamentals,” including enhanced merchandising, transforming its supply chain, achieving operational efficiencies, and better engaging with its customers. The new plan calls for Lowe’s to achieve a 12% operating margin over the medium-term compared with its current operating margin of 9.2%, and Home Depot’s operating margin of 14.6%. Achieving these targets will generate significant profit improvement which, when coupled with the company’s large and ongoing share repurchase program, will further accelerate future earnings per share growth.

While Lowe’s has already demonstrated early signs of progress, we believe the positive impact of the company’s business transformation will become more pronounced over the course of 2019. Lowe’s currently trades at 17 times analyst estimates of 2019 earnings, a discount to Home Depot, even though these estimates do not incorporate the potential for future profit improvement. We believe that there is substantial upside potential as Lowe’s narrows the performance gap with Home Depot, which will significantly increase earnings, and likely result in a valuation that better reflects the company’s underlying business quality and long-term growth prospects.

In 2018, Lowe’s share price, including dividends, appreciated 8% from our initial average cost, as initial investor excitement regarding the turnaround potential was partially offset by concerns regarding recent weakness in the housing market. We believe that there is likely further upside to the housing cycle as many of the fundamental drivers of the housing market remain intact. Furthermore, Lowe’s derives a meaningful portion of its revenue from less-cyclical repair and maintenance spend, which should moderate the impact of fluctuations in the housing cycle. In 2019, the company’s share price has increased 13%.” 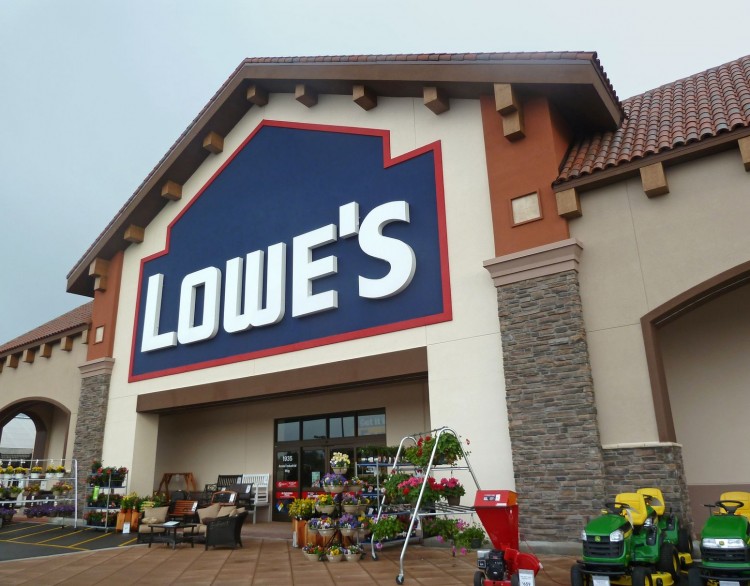 Lowe’s Companies is a home improvement company that offers a plethora of products for repair, decorating, and maintenance. It runs around 2,370 hardware/home improvement stores. This $86.02 billion market cap company is based in Mooresville, North Caroline, but offers its services across the US, Mexico, and Canada.

At Q4’s end, a total of 53 of the hedge funds tracked by Insider Monkey were bullish on this stock, a change of -7% from the previous quarter. By comparison, 72 hedge funds held shares or bullish call options in LOW a year ago. With hedge funds’ positions undergoing their usual ebb and flow, there exists a few notable hedge fund managers who were boosting their stakes meaningfully (or already accumulated large positions).

According to Insider Monkey’s hedge fund database, Pershing Square, actually holds the number one position in Lowe’s Companies, Inc. (NYSE:LOW). The fund has a $880.8 million position in the stock, comprising 14.8% of its 13F portfolio. Coming in second is D. E. Shaw of D E Shaw, with a $817.7 million position; 1.1% of its 13F portfolio is allocated to the company. Remaining hedge funds and institutional investors with similar optimism contain Cliff Asness’s AQR Capital Management, Israel Englander’s Millennium Management and Daniel S. Och’s OZ Management. 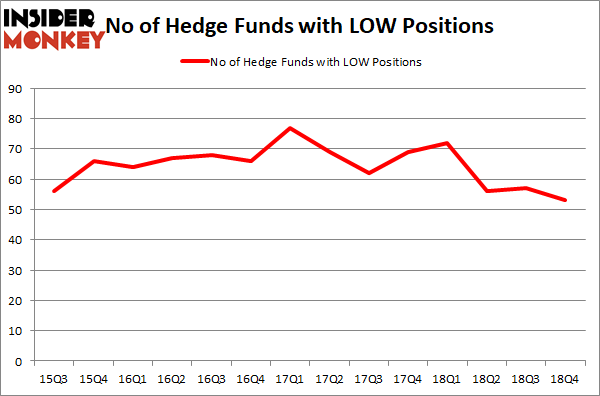