Look Who Else Is Flying Delta Air Lines, Inc. (DAL) These Days

Delta Air Lines, Inc. (NYSE:DAL) is one of the largest and most successful U.S. airlines today. In 2012, the company carried more than 100 million passengers on the way to earning an adjusted profit of $1.55 billion. This strong momentum has led to enviable gains for shareholders: Delta Air Lines, Inc. (NYSE:DAL) stock has nearly doubled since the beginning of December. 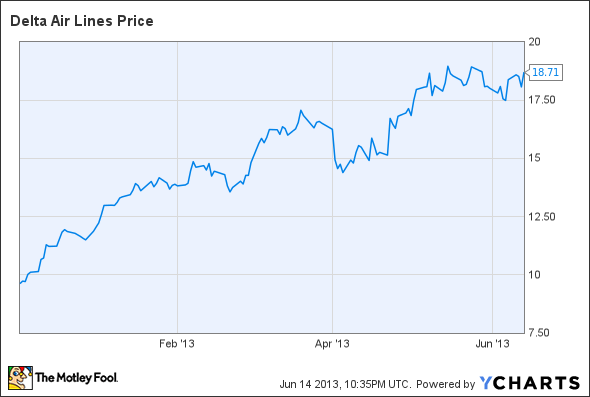 Among the many passengers flying Delta Air Lines, Inc. (NYSE:DAL) last year, one may have escaped notice: top competitor United Continental Holdings Inc (NYSE:UAL). United, which has performed far worse than Delta recently — it earned an adjusted profit of just $589 million in 2012 despite being similar in size to Delta — has nevertheless managed to ride Delta’s coattails to stock greatness in the last six months. 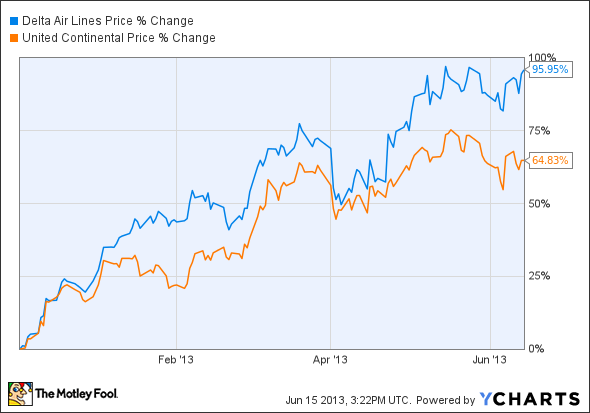 While United Continental Holdings Inc (NYSE:UAL)’s stock has not performed quite as well as Delta’s, a 65% gain is nothing to sneeze at. Clearly, Mr. Market is extrapolating from Delta Air Lines, Inc. (NYSE:DAL)’s success and assuming that United will be able to achieve similar profitability soon, particularly now that it has nearly finished integrating United and Continental. However, Mr. Market (and United investors) may be in for a surprise, because while Delta Air Lines, Inc. (NYSE:DAL) is the real deal, United Continental Holdings Inc (NYSE:UAL)’s results will not be able to support its high stock price.

Disappointment ahead
United’s stock has been soaring despite a weak performance in the first half of 2013. The company posted an adjusted loss of $0.98 per share in Q1. Capacity reductions drove a healthy 5.9% unit revenue increase, but this was more than offset by a 6.5% increase in unit costs. Cost growth has moderated in Q2 as jet fuel prices have fallen, but unit revenue has simultaneously taken a turn for the worse, decreasing 0.5% in April and a similar amount in May.

Coming into Q2, industry analysts expected United to return to strong profit growth, but they have since been forced to backtrack due to the company’s weak revenue performance. The average analyst EPS estimate for Q2 has dropped precipitously from $1.98 60 days ago (around the time of United’s Q1 earnings report) to $1.42 today.

Strangely, while lowering their estimates for this quarter, analysts have actually raised their estimates for Q3 EPS from $2.21 to $2.31 over the past 60 days. Q4 EPS estimates have risen even more sharply, to approximately $0.65, which would be a big swing from last year’s $0.58 per share loss in the fourth quarter.