Long gone are the days when Monster ancestor Hansen’s Natural manufactured juice. Monster Beverage Corp (NASDAQ:MNST)’s main revenue component now is its Monster Beverage Corp (NASDAQ:MNST) brand, which, according to Morningstar, makes it the largest seller of energy drinks in the United States convenience-store channel (a 31% unit share versus privately held Red Bull’s 27%). Furthermore, the company went from generating $1.3B of revenue in 2010 to $2.06 in 2012. Way to go! 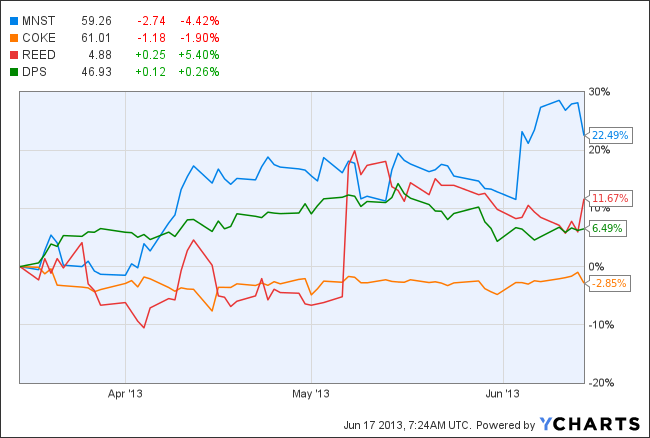 Some may think that Monster is big enough to continue expanding its revenue at the same growth rate. That may be true for the U.S., where retail sales are just slightly below Red Bull, but how about international operations?

First of all, Monster Beverages only covers 80 countries, in comparison with Red Bull’s 164-country network. According to Morningstar analyst Thomas Mullarkey, this shows that Monster Beverage’s growth is just starting. Despite offering more quantity for the same price and an appealing design and concept to the young, Monster’s revenue outside of the United States is roughly 10% of what Red Bull generates!

Management is committed to achieving international expansion and therefore Monster Beverage’s marketing budget will, most likely, continue increasing. The company has been quite aggressive with pricing. In Japan, for example, a Monster can is 20% cheaper than Red Bull. And because of its interesting design, its curious name and price, many are starting to become loyal customers. A strong brand in the making!

Also notice that as Monster continues expanding its international operations, it will start benefiting from economies of scale and it will also become able to raise its price, thereby increasing international profits. Regarding this point, Stifel analyst Mark Astrachan said in April that Monster’s annual operating profits from sales outside of the US would increase from $5M last year to $101M in 2015. At the same time, international operating margins would rise from 1.1% to 13.4%.

2. Monster does not own a distribution network

Instead of building its own distribution network, which is a very expensive thing to do, Monster uses some of its partners’ networks, including The Coca-Cola Company (NYSE:KO)‘s . This may sound like a disadvantage, but it is totally the opposite. Maintaining a distribution network is certainly not a priority for Monster at this moment. Instead, the company is focusing on higher-return activities, like building its brand internationally.