How can we continue to employ hundreds of thousands of skilled U.S. workers, support the U.S. economy, and invest in a stable, innovative company? This article will shed light on such a dynamic company and its international influence.

There are currently 71 air force installations in the U.S. and  63 international military bases. Approximately 325,000 US military personnel are based globally.

The Centre for Arms Control and Proliferation gives us a detailed analysis of U.S. military spending. The Obama administration requested a base budget of $526.6 billion for 2014. An additional $88.5 billion for Overseas Contingency Operations (OCO) has also been requested to continue the war in Afghanistan. These figures are not final as a final request will be submitted. The total expenditure for 2014  is approximately $640.5 billion. This is an increase of $1.4 billion from fiscal 2013 levels.

The bottom line is that national security spending is high and is not decreasing anytime soon. Post September 11, the U.S. has heralded in a century of law enforcement and military spending globally. North Korea’s missile launch tests in 2012 and 2013 are a reason for the U.S military spending authorized by the Pentagon. Growing escalations with Iran are also a reason for extensive air support in the Middle East according to the Pentagon.

Air superiority leads us to the F-35 Lightening II Joint Striker Fighter (JSF), and what this means to investors. The F-35 Lightning II combat fighter is manufactured by Lockheed Martin Corporation (NYSE:LMT). What makes the F-35 unique you may ask? Stealth capabilities and more than 50 years of fighter development.

Originally conceived in the 1990s, the F-35 evades detection, flies at supersonic speed, and is extremely agile. International demand for this fighter plane is coveted by many world powers, including Israel. The manufacture of this stealth fighter employs 127,000 employees in 47 states. 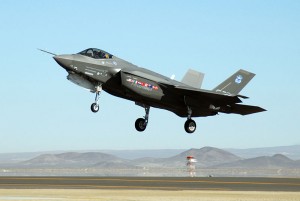 International orders for this combat aircraft are prevalent. Israel ordered 20 F-35I variant aircraft in 2010. Italy approved the purchase of 131 F-35 aircraft and construction for final assembly at the Cameri Air Base. Australia purchased 14 F-35A aircraft in 2010. The U.K. ordered 3 F-35s in 2009 and 2010. Japan plans to purchase 42 aircraft to replace the F-2 and F-15 aircraft in its fleet. Canada has selected the F-35 for its future air force fleet. According to the Pentagon, the F-35 will cost around $110 million per unit with an operation cost of $31,900 an hour.

The prohibitive cost of the F-35 has resulted in some countries reducing their orders. The manufacturing delay and reduction of orders from some countries is irrelevant from an investor’s viewpoint for the following reasons.

Ongoing conflicts over oil in the Middle East will not probably grind to a halt anytime soon. A $9 billion tentative order by the Pentagon this June for 60 F-35 jets is less than two months away. If this order is finalized, expect an increase in the share price of Lockheed Martin Corporation (NYSE:LMT) and companies that manufacture components for the stealth aircraft.