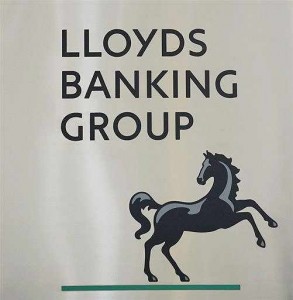 LONDON — With the mining sector falling after fresh Chinese statistics put pressure on commodities prices, the FTSE 100 has fallen back from last week’s five-and-a-half-year highs today. Approaching midday, the index was down 14 points to 6,611. Whether the FTSE will manage to hang on to the 6,600 level remains to be seen, though the actual value of the index has no real meaning.

Which companies are depressing the FTSE today? Here are three whose share prices are falling:

Lloyds
Lloyds Banking Group PLC (ADR) (NYSE:LYG) shares fell 2.4% to 57.5 pence today after the bank told us that chairman Sir Winfried Bischoff is to step down this month and that no successor has yet been chosen. Sir Winfried said: “Whilst clearly some challenges remain, the performance of the Group is well on track.”

Today’s dip is but a small blip compared to the past year’s performance, as the price has still almost doubled over the past 12 months. On forecasts for the year ending December, Lloyds Banking Group PLC (ADR) (NYSE:LYG) shares are on a P/E of 13, which is close to the FTSE’s long-term average of around 14 — but expectations of stronger earnings growth for 2014 drop that to about 10.5.

ITV plc (LON:ITV) shares dipped slightly today, losing a little under 1% to 130 pence, after the broadcaster announced the acquisition of a controlling share of High Noon Entertainment. ITV plc (LON:ITV) will take a 60% stake in High Noon, which specializes in reality TV and entertainment shows for the American market, for a basic price of $25.65 million — but there may be more to pay in 2015 depending on performance, and ITV has an option to buy the rest up to six years later.

The ITV plc (LON:ITV) share price has recovered well of late, up around 55% over the past 12 months. Forecasts suggest a 10% rise in earnings per share this year, putting the shares on a fairly undemanding P/E of 13. But the expected dividend yield, of about 3%, is nothing to shout about.

IQE
AIM-listed IQE plc (LON:IQE) saw its shares slip 1.6% to 22 pence, despite the semiconductor wafer developer having announced the launch of a new “IQE Wireless” division, to “provide its customers with a complete ‘one stop shop’ for radio frequency (RF), wireless epitaxial wafer materials.” The new division’s boss, Russ Wagner, said “IQE plc (LON:IQE) is clearly acknowledged as the world leading supplier of advanced semiconductor wafers for wireless products and enjoys excellent and close working relationships with customers in the RF space.”

Based on current forecasts, IQE plc (LON:IQE) shares are on a forward P/E of 10.5 for the year to December, dropping to just 7 for 2014. Is this a buying opportunity in a high-tech growth market? That’s for you to decide.

Finally, reliable dividends can more than compensate for the day-to-day ups and downs of share prices. So how about a company that’s offering a 5.7% yield and which could be set for some nice share price appreciation too?

The article Why Lloyds Banking Group, ITV, and IQE Should Lag the FTSE 100 Today originally appeared on Fool.com.