LIT In Depth: The Five Minute Guide To The Lithium ETF 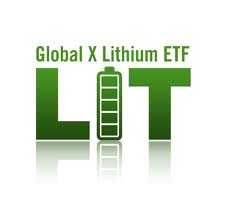 When it comes to commodity investing, there are a few big players that tend to gather the majority of investor attention. Futures products like crude, gold, and natural gas gobble up headlines while others like sugar and aluminum tend to fall by the wayside. Commodities like zinc and tin have far more practical industrial use than something like gold, yet their respective volumes come nowhere near the coveted precious metal. For those investors looking to make a commodity play that brings you closer to the ground in an economic sense, there are a number of strong options available [for more commodity news and analysis subscribe to our free newsletter]

Perhaps one of the most interesting and overlooked plays comes from lithium. Lithium is a soft metal that appears a silver-white color and trace amounts of it are actually detectable in all living organisms Thisalkali metal is not the most popular when it comes to trading volume, but it is perhaps one of the most practical options available and it has a strong growth potential for the foreseeable future.

Lithium has a variety of applications, and is used widely in pharmacology, ceramics, aluminum, and a number of clean technology processes. Lithium is one of the lightest metals and can store three times the energy of competing materials, which makes it the most attractive battery material according to the U.S. Geological Survey reports. It can be charged and discharged hundreds of cycles without substantial degradation, loses very little charge while idle, and has no memory effects. Moreover, lithium isenvironmentally friendly compared to existing nickel-metal hydride or lead-acid battery technologies, a major driver of widespread use in batteries for hybrid and electric cars.

Most consumers already use small lithium batteries in a variety of everyday products such as wristwatches and portable consumer electronics. But the game-changer for lithium demand is the rechargeable lithium-ion battery. These products are used in many consumer electronics such as laptops and cell phones due to the high energy to weight ratios; over 90% of laptops use the technology and just over 60% of cell phones are lithium-ion powered. These batteries are gaining added traction as a power source for cars, planes, and military vehicles, which could propel demand for the metal to new heights. Within the auto industry, the Chevy Volt, Mitsubishi i-MiEV, Tesla Roadster, and Nissan Leaf are all available highway vehicles powered by a lithium-ion battery pack, with the Chrysler EcoVoyager, Dodge ZEO, Jeep Renegade and the Opel Flextreme all slated for “li-ion” batteries as well [see alsoPowerhouse Producers: Cocoa, Platinum, Rare Earth Metals].

An investment in lithium can also be considered as an investment in the growth of technology, as the two industries will likely parallel each other in the coming years. The relationship is comparable to the semiconductor industry versus the tech sector; both depend on each other and help the other grow. When it comes to lithium exposure, however, the list of options is relatively thin. One of the best ways for consumers to gain access to this metal comes from the Lithium ETF (LIT) from fund issuer Global X.

Behind The Curtain: LIT

This fund, tracks the Solactive Global Lithium Index, which is comprised of companies globally that are primarily engaged in some aspect of the lithium industry such as lithium mining, exploration and lithium-ion battery production. The ETF was brought to market in July of 2010 and charges an expense ratio of 75 basis points. As far as performance is concerned, Global X Funds (NYSEARCA:LIT) does not have the most promising historical returns; in 2011 alone the fund was down nearly 37%. To date it looks like LIT’s luck might be changing, as its up almost 8% in 2012. The likely culprit of lithium’s demise comes from the dragging global economic recovery and lower-than-expected growth in a number of technological sectors on which lithium depends for its livelihood.

Underlying holdings in this fund are dominated by international stocks, but still feature a surprising U.S. allocation of roughly 37%; most metals equity funds feature a great deal of international exposure with little left for domestic firms. Though international equities are more present in the fund, the U.S. is still the largest single country allocation, followed by Australia, Chile, and Canada. As far as market capitalization is concerned, the fund has heavy weightings in medium, small, and micro cap companies, evening out to create a small-cap structure overall.

Investors should note that this product is relatively volatile, with a beta score of 1.66 and a 200 day volatility of 22.50%, which is actually half of what it used to be. Investors need to remember that this is an equity product, meaning that it will not always coincide perfectly with lithium’s underlying spot price; while it offers good exposure to lithium, those wishing for a more direct play may be better served elsewhere. But for those who buy into its strategy as well as the long-term growth outlook for lithium, LIT may be the perfect addition to your portfolio.