A SWOT analysis is a look at a company’s strengths, weaknesses, opportunities, and threats, and is a tremendous way to gain a detailed and thorough perspective on a company and its future. As 2013 begins, I would like to focus on a steady natural gas exploration and acquisition company: Linn Energy LLC (NASDAQ:LINE). 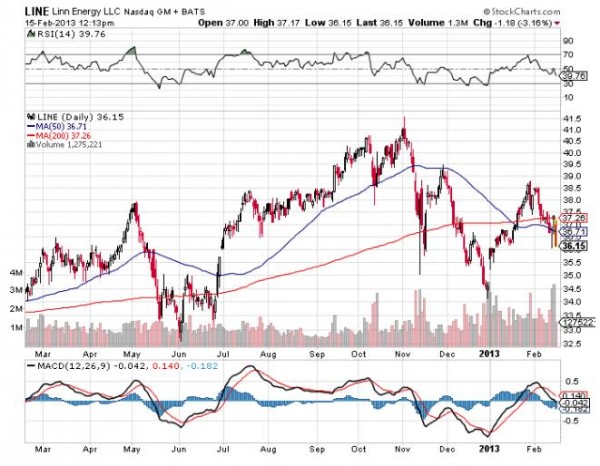 1). Accelerated Revenue Growth: In 2009, Linn Energy reported revenue of $408 million; in 2011, the company announced revenue of $1.16 billion, representing year over year annual growth of 68.62%, a trend that is highly anticipated to sustain into the future with projections placing 2014 revenue at $2.78 billion. This growth has been due to acquisitions that have yielded significant returns.

2). Massive Dividend: At the moment, Linn Energy pays out quarterly dividends of $0.73, which when annualized puts the dividend as yielding 7.79%

3). Double Digit Net Profit Margin: Currently, the company carries a net profit margin of 27.02%, representing a strong and profitable company primed for growth into the future

1). Net Debt: The company possesses $1.15 million of cash and cash equivalents on their balance sheets, but their debt load of $6.84 billion results in a massive net debt for the company, a major downside to the business

3). Lack of Institutional Confidence: Only 25.58% of shares outstanding are held by institutional investors, displaying the lack of confidence some of the largest investors in the world have in the company and its future

4). Growth in Operating Expenses: Over the past five years, Linn Energy’s revenue has grown 13.06%, while operating expenses have grown 86.50%, representing margin contraction, a troubling sign for a company

1). Dividend Growth: Since implementing their dividend program in 2006, Linn Energy has consistently raised their dividend payouts, a trend that is highly anticipated to sustain into the future as free cash flow becomes more abundant 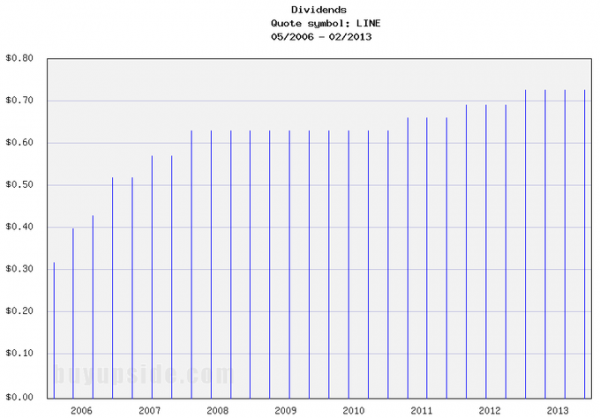 2). Acquisitions: The company has a long history of acquiring property and other companies and successfully yielding natural gas from these acquisitions, with the most recent coming in December 2011, and further acquisitions could introduce inorganic growth to the company and reward shareholders

4). Growth in Demand for Natural Gas: Growth in the demand for natural gas could drive strength in natural gas prices, which could increase Linn Energy’s margins

2). Government Regulation: Controversial exploration methods for natural gas, such as fracking, have faced severe government regulation, and any further regulation passed down by Washington could cripple the company’s ability to increase its production level and find new reserves

Financially, Linn Energy is relatively solid. The company possesses a business model producing a double digit net profit margin, accelerated revenue growth, and a relatively cheap valuation. However, the company carries fluctuating profit and a massive debt load. Above all, the company’s enormous dividend and ability to continually raise their dividend payouts provides immense opportunity to investors, and over the long-term, Linn appears to be a company primed to provide solid returns through all economic cycles.

The article A Steady Energy Company Doling out Nearly 8% originally appeared on Fool.com and is written by Ryan Guenette.

When Is a Barrel Not a Barrel? – Devon Energy Corporation (DVN), Apache...

Here’s What This Big Market Beater Has Been Buying and Selling: Allergan...