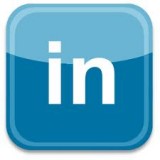 Recent vices of mine are quite different from what they were pre-children years. Drinking myself to a stupor and spending a month’s salary on clothes have been replaced by watching Monk reruns on TV, and more pleasurably, checking out what certain old colleagues are doing right now. I’m not focused on the fellow competitive folks who come from meager beginnings like myself. When I get online, I’m eager to experience schadenfreude – scoping out the many lowlifes who’s career paths somehow managed to intersect mine at one point. I’m counting on karma to show itself within an appropriate time frame of a few years.

I do this mainly by LinkedIn, the online professional networking site. Or more realistically, the public resume site. And I like to do this in the privacy of my own head, so I have my LinkedIn profile’s privacy setting set to “You will be totally anonymous.” But a few issues – the 3rd one below, namely – are making me believe my schadenfreude is not worth the possibility of the breach of my privacy.

Issue 1. Earlier this year LinkedIn Corporation (NYSE:LNKD) managed to lose millions of users’ email and password combinations. Having nothing sensitive on LinkedIn is not the issue as the hackers know some people use the same password across sites. An old email account of mine was hacked, and I know this is how it happened.

Issue 2. A few months ago, I reached out to LinkedIn Corporation (NYSE:LNKD) to comment on a theme I was seeing. I was concerned that even though a LinkedIn user who indicates they want their profile to remain anonymous to the person whose profile they’ve viewed, that occasionally the searcher’s profile comes up on the said viewed member’s page as someone who they might like to connect with?

For example, let’s use Adrian and Sharona.

Suppose Adrian indicates in his settings that he’d be totally anonymous if he viewed some body’s profile. Then he view’s Sharona’s profile. Sharona and Adrian have absolutely no connection whatsoever apart from this. No email, no Facebook relationship, nothing. Then at some point after Adrian has seen Sharona’s profile, Sharona goes to the “People You May Know” section of her LinkedIn page, located in the upper right corner of the homepage. On it, she sees Adrian’s profile, in which there is no 2nd or 3rd degree of connection. Namely, there is no logical reason Adrian would come up as a suggestion. Could LinkedIn have assumed they know each other because…. perhaps Adrian viewed Sharona’s profile?

A corporate spokesperson from LinkedIn Corporation (NYSE:LNKD) told me that the LinkedIn system was complex and constantly evolving and that it took many characteristics into account when coming up with the list of recommendations. The comment rested on that, and they neither denied or affirmed my suspicion.

We wrote an article soon after that that didn’t mention these concerns because I couldn’t independently verify my suspicion. After all, the company’s numbers were great.

Issue 3. This morning, I finally had proof that the company is not taking the measures it needs to garner the support of individuals who want to be as private as possible on the Internet. In my inbox this morning, I opened up an email titled “Brandon XXX and 10 others viewed your profile”. Obviously I’m trying to keep Brandon’s identity secret on this post, but LinkedIn gave me his full name. The email also gave me 3 others full names and titles. But when I go to my account page on LinkedIn to see who’s viewed my profile, for those who have chosen so, I only get these individuals’ industry or nothing at all. In other words, people who have chosen to remain anonymous or semi-anonymous nevertheless appear with their name and face on my email.

The contents of the email can be found on the below attachment. You can see there that the full name, picture and title is given for 4 individuals. I’ve blurred them partly to protect them but I’ve kept enough there so that you can see what LinkedIn did. 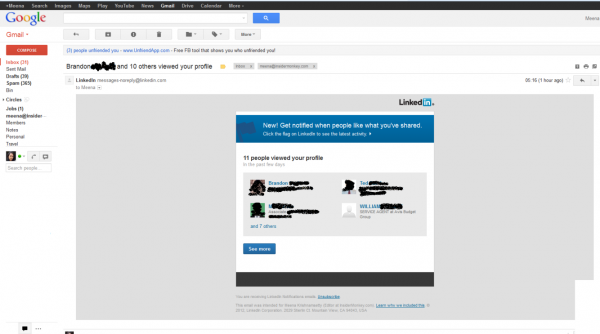 In the next two screen shots, you can see what my LinkedIn account shows as people who have viewed my profile. The four individuals in the email are among the anonymous users in the LinkedIn screen shots. 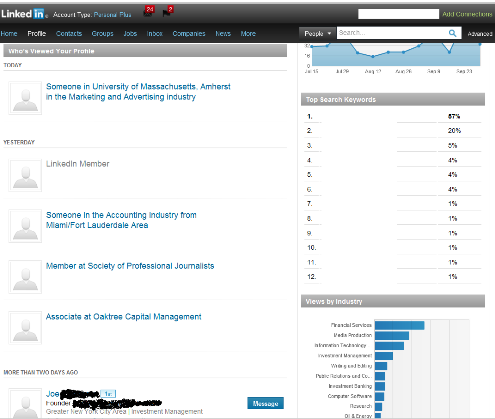 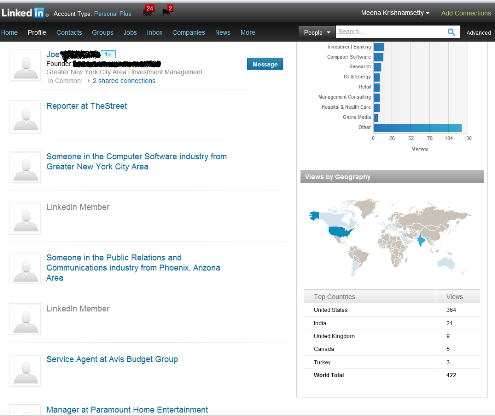 You can verify this if you received this type of email this morning.

An email sent to LinkedIn asking for comment on this issue has not been responded to.