LinkedIn Corp (LNKD)’s Billion-Dollar Share Sale: Should You Be Buying?

U.S. stocks are little changed this morning, with the S&P 500 (INDEXSP:.INX) and the narrower, price-weighted Dow Jones Industrial Average (INDEXDJX:.DJI) up 0.38% and 0.2%, respectively, as of 10 a.m. EDT. The specter of a U.S. strike — even a limited one — in Syria is almost certainly weighing on investors as the Obama administration continues to lay the groundwork for such an action.

Investors are right to be at least a little bit nervous: While on the face of it, a “surgical” missile strike on Syria would appear to be a low-risk form of retaliation for the alleged use of chemical weapons by the Assad regime, this sort of thing can have unintended consequences.

You’ve come a long way, LinkedIn !
What a difference two years makes! Back in November 2011, when professional-networking site LinkedIn Corp (NYSE:LNKD) pursued a secondary share sale, it was unable to raise the $100 million it was aiming for (the company had to settle for $88 million.) Yesterday, the company filed a prospectus for a $1 billion stock offering that grants the underwriters the option to purchase another $150 million of shares.

Since the 2011 offering, LinkedIn Corp (NYSE:LNKD)’s shares have more than tripled: 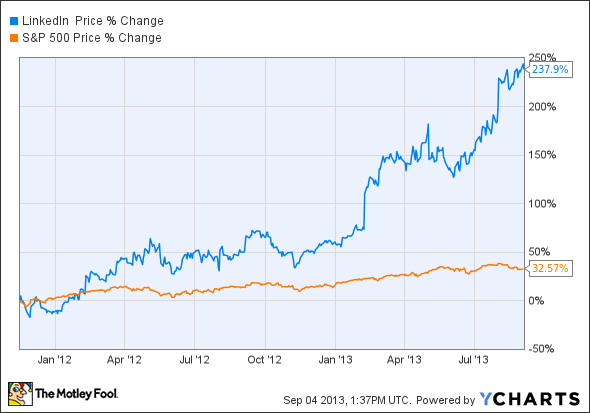 According to the offering prospectus, “The principal purposes of this offering are to increase our financial flexibility and to further strengthen our balance sheet.”

Really? Because with $873 million in cash and equivalents and zero debt (as of June 30), that balance sheet looks pretty darn strong already — particularly when one considers that the business is solidly profitable, generating nearly $240 million in free cash flow over the past 12 months. Indeed, the company itself admits that “based on our current cash and cash equivalents balance together with cash generated from operations, we do not expect that we will have to utilize any of the net proceeds to us of this offering to fund our operations during the next 12 months.”

All of which makes the following language sound like boilerplate: “As of the date of this prospectus, we cannot specify with certainty all of the particular uses for the net proceeds to us of this offering. However, we currently intend to use the net proceeds to us from this offering primarily for general corporate purposes, including working capital, further expansion of our product development…” and blah blah blah, etc.