How many things in life are really, really good, yet still over-rated? Madonna? Justin Bieber?The McRib sandwich? The TV series Mad Men? Well, you can add LinkedIn Corp (NYSE:LNKD) to that group.

For now, LinkedIn Corp (NYSE:LNKD) deserves to be considered a desired monopoly. It is the world’s largest dedicated employment networking site. And most people agree that there should be just one of those. Cementing LinkedIn’s status is its role as the center of a large and growing Human Relations (HR) ecosystem. It’s $26 billion market capitalization is more than five times the value of BlackBerry, and one-third of Facebook Inc (NASDAQ:FB)’s market capitalization. The company has over 238 million members, and is increasing the number of users by double digit percentages every year. To me, this situation sounds more like a bubble than a healthy company, but without statistical facts to back it up, that opinion is just that: an opinion.

At their core, Facebook Inc (NASDAQ:FB) and LinkedIn Corp (NYSE:LNKD) are social networks. With one big difference: Facebook has over 1 billion members and LinkedIn has “only” 238 million.

Facebook Inc (NASDAQ:FB) has not made a major effort to provide a LinkedIn-style professional network service. However, Facebook does offer several services that could be interpreted as competitive. First, of course, virtually every business in the world has a presence on Facebook, where it curates (to varying degrees) its image. The second aspect is the many applications that operate “on top” of Facebook’s vast network.

BeKnown, is a Facebook Inc (NASDAQ:FB) application designed to be a recruiting platform. The application is controlled by Monster Worldwide, Inc. (NYSE:MWW), the largest dedicated job search site, and largely seeks to extend the Monster search tools and site experience onto the Facebook network. BeKnown only went “live” in mid 2011, but is starting to be recognized by many professional organizations on Facebook.

Despite this growth, Monster Worldwide, Inc. (NYSE:MWW) still only ranks No. 526 globally and No. 117 in the United States for online traffic, compared to LinkedIn Corp (NYSE:LNKD)’s 14th, and 10th positions, respectively. Monster.com simply doesn’t stand a chance; the company’s technology is outdated and the only thing it’s been doing lately is cutting costs, which is only a short-term solution.  The only real competitor to LinkedIn is Facebook Inc (NASDAQ:FB), and the thousands of applications it hosts and creates everyday.

With LinkedIn’s Price/Earnings (P/E) ratio approaching 700 and the stock price at its all-time high, many would argue that the stock is overvalued from those numbers alone, but like any savvy analyst, we must dig a little deeper.

Free cash flow yield (FCF) shows you what percentage of a company’s share price is represented by the cold, hard cash it’s churning out. The higher this percentage, the better. Lets compare LinkedIn to its social media rival, Facebook. 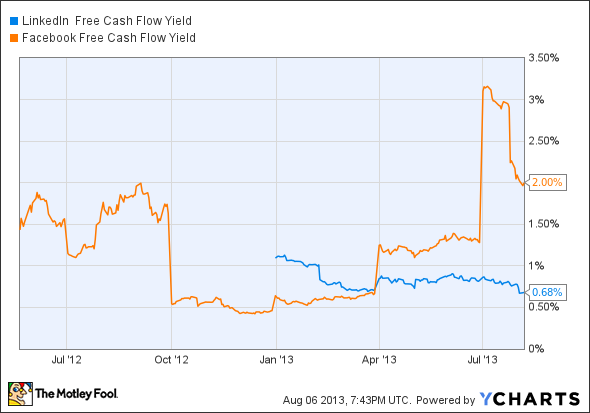 As the chart depicts above, Facebook’s free cash flow yield is nearly four times that of LinkedIn. Some investors regard free cash flow (which takes into account capital expenditures and other ongoing costs a business incurs to keep itself running) as a more accurate representation of the returns shareholders receive from owning a business, and thus defer to free cash flow yield as a valuation metric over earnings yield, which is why I’ve used it herein. LinkedIn’s free cash flow margin has averaged about 10.2% during the past 3 years. As such, many analyst expect them to maintain that margin. Facebook on the other hand, has experienced some decrease in their FCF percentage, especially since their precipitous IPO drop, but since the stock recently recovered all of its lost value, expectations for future cash flow growth are nearly identical to LinkedIn.