I had a chance to catch up on some long overdue reading this past weekend, including the book Debunkery by Ken Fisher. In the book, Fisher details several common myths that cost investors money.

One of his myths had previously been on my mind. It’s the idea that the mass retirements of “Baby Boomers” are going to derail the economy by bankrupting Social Security and medical services.

Ken Fisher believes it’s bunk, but I’ll take it a step further. I literally believe the exact opposite is true. The “Baby Boomers” aren’t going to derail our economy, they’re actually going to save it.

The Baby Boomer scare is bunk

For every Boomer that outnumbers a younger adult, there’s one fewer skilled worker in the economy. These “scary” Baby Boomer retirements actually have the potential to lead the U.S. to a skilled labor shortage, which will lower unemployment and drive many industries forward.

While a potentially lower unemployment rate will benefit all sectors, being partial to labor markets, I prefer businesses that connect skilled workers with employers.

Here is Your Skilled Labor Portfolio

I’ve spent the past two years fawning over LinkedIn Corp (NYSE:LNKD), and I’m not going to let a high valuation stop me now. Sure, the stock is trading at a P/E ratio over 600 at the moment, but as fellow Fool Dan Sparks recently pointed out recently, the company does a far better job at monetizing its members than other network sites, like Facebook.

I like LinkedIn Corp (NYSE:LNKD) because it has a “network effect” moat that’s actually useful. People aren’t just logging on to stare at pictures of their friends; they’re networking, finding jobs, and recruiting candidates.

LinkedIn Corp (NYSE:LNKD) recently reported another blow-out quarter, lead by new membership growth of 37%, and a whopping 69% gain in its talent solutions business. The company has untapped options to maximize the talent solutions business. For one example, it could stop letting Recruiters connect with (and thus recruit) candidates for free. LinkedIn Corp (NYSE:LNKD) could also charge recruiters to post jobs in its group sections, which it currently does not.

Premium memberships are just a preview of how LinkedIn Corp (NYSE:LNKD) can potentially squeeze Recruiters in the future. As membership increases, so will Recruiters willingness to “pay to connect” with top talent.

This stock is very pricey today, so I can’t tell you to run out and buy a truckload of shares today. I like the idea of buying a third of your position on any decent pullback, and then holding on to LinkedIn for a very long-term investment.

If you’re looking for a similar business, with a cheaper valuation, then DICE HOLDINGS, INC. (NYSE:DHX): may be a good fit.

The company, as you can see, has seen steady revenue growth since the recession and simply needs to find a way to drive more of their income to the bottom line. 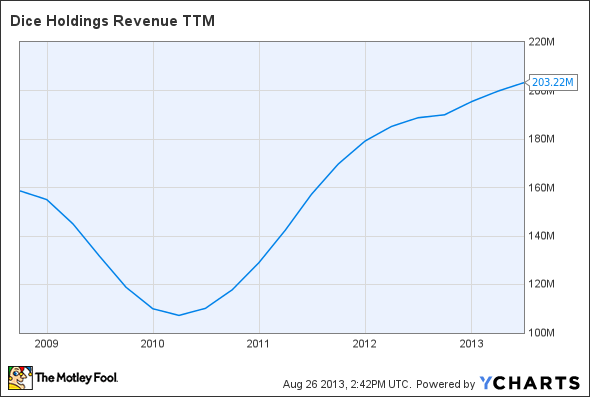 With a forward P/E of just 14, this attractive job board is “cheaper” than LinkedIn Corp (NYSE:LNKD), and it may make a decent acquisition target as well.