The company has done very well over the past several years, and shareholders have been nicely rewarded as a result.  Since hitting a low of $5.98 in 2010, Limited Brands has rebounded to its current level of around $44 per share.  With the company set to report fiscal year 2013’s earnings next Wednesday (Feb. 27), should investors take their profits now or are there more good times ahead?

Formerly known as The Limited, Limited Brands has divested its apparel business over the last several years, and now only conducts its business in the two brands mentioned above.  From 2008 to 2012, the company sold its ownership in Express and The Limited, as well as over half of its third-party apparel sourcing business.

Limited Brands’ biggest strength is the absence of direct competition.  Both Victoria’s Secret and Bath & Body Works have been referred to as “category definers” and as such have a tremendously loyal customer base.  With a constant inflow of new products and a great job with targeted promotions, I don’t anticipate this changing anytime soon.

The major competition to Limited Brands includes other apparel retailers, such as The Gap Inc. (NYSE:GPS), which sells women’s intimate apparel to would-be Victoria’s Secret customers as a matter of convenience.  If someone is at a Gap or Banana Republic to buy jeans, it stands to reason that they’ll take a look at the intimate apparel section as well.

The second type of competitor is a matter of economic conditions.  When consumers have a high level of disposable income, stores like Victoria’s Secret tend to do well.  In challenging economic times, stores such as Wal-Mart Stores, Inc. (NYSE:WMT) that sell less trendy but lower-cost products tend to do better, as evidenced by the revenue charts below. 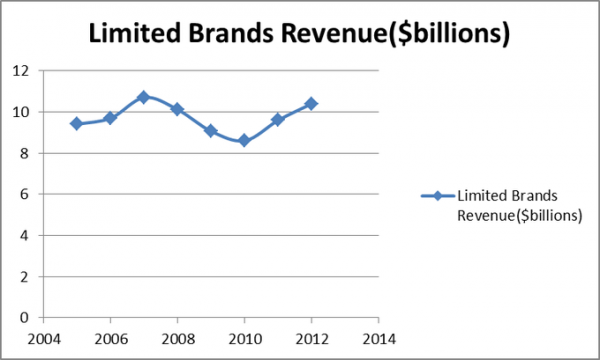 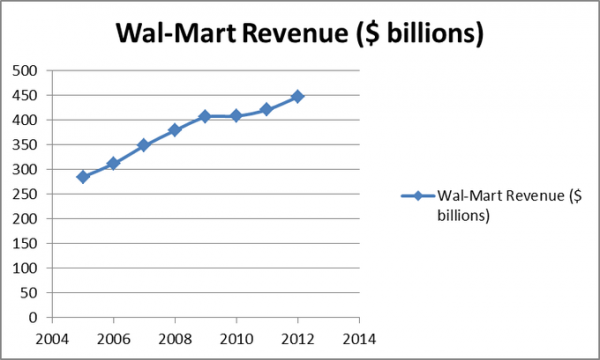 Limited Brands is expected to report FY 2013 earnings of $2.88 per share when they report next week. That means that the stock trades at 15.7 times current year earnings, which are projected to grow to $3.27 and $3.71 over the next two years, for an average forward growth rate of 13.5%. That more than justifies the valuation.

My general rule of thumb is that any prospective investment should trade at a lower P/E ratio than twice its growth rate, and the discount should increase proportionally with the risk involved.  As a mature retailer, I see Limited Brands as a relatively low-risk investment, so a P/E to doubled growth ratio of 15.7:27 or 58.1% is pretty attractive indeed.

For comparison’s sake, let’s look at the valuation of Wal-Mart.  As the largest retailer in the world, and one that benefits in good and bad economies, you simply won’t find a lower-risk retail investment.  Wal-Mart trades at 14.1 current year earnings, and are projected to grow at an average rate of 10%.  So, using my handy ratio (it’s not actually mine, a lot of investment analysts use this rule), a 14.1 P/E to 20 ratio equals 70.5%.  In other words, Wal-Mart trades at a premium (and rightly so) to specialty retailers like Limited.