Hedge funds and large money managers usually invest with a focus on the long-term horizon and, therefore, short-lived dips on the charts, usually don’t make them change their opinion towards a company. This time it may be different. During the first 6 weeks of the fourth quarter we observed increased volatility and small-cap stocks underperformed the market. Hedge fund investor letters indicated that they are cutting their overall exposure, closing out some position and doubling down on others. Let’s take a look at the hedge fund sentiment towards Liberty Expedia Holdings, Inc. (NASDAQ:LEXEA) to find out whether it was one of their high conviction long-term ideas.

Liberty Expedia Holdings, Inc. (NASDAQ:LEXEA) was in 24 hedge funds’ portfolios at the end of the third quarter of 2018. LEXEA investors should be aware of an increase in activity from the world’s largest hedge funds lately. There were 16 hedge funds in our database with LEXEA holdings at the end of the previous quarter. Our calculations also showed that LEXEA isn’t among the 30 most popular stocks among hedge funds. 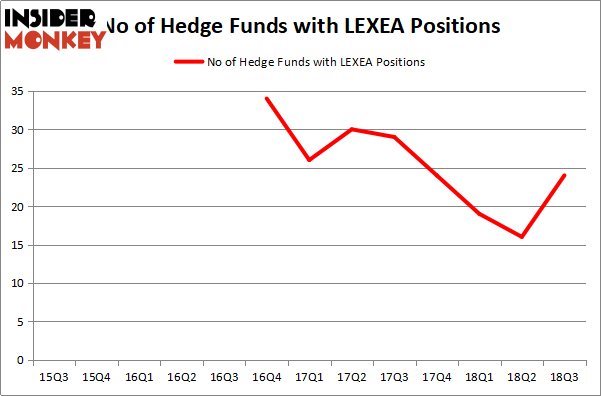 Among these funds, FPR Partners held the most valuable stake in Liberty Expedia Holdings, Inc. (NASDAQ:LEXEA), which was worth $86.2 million at the end of the third quarter. On the second spot was D E Shaw which amassed $50.8 million worth of shares. Moreover, Polar Capital, AQR Capital Management, and Hudson Bay Capital Management were also bullish on Liberty Expedia Holdings, Inc. (NASDAQ:LEXEA), allocating a large percentage of their portfolios to this stock.

As you can see these stocks had an average of 15.5 hedge funds with bullish positions and the average amount invested in these stocks was $211 million. That figure was $325 million in LEXEA’s case. Weatherford International plc (NYSE:WFT) is the most popular stock in this table. On the other hand Quaker Chemical Corp (NYSE:KWR) is the least popular one with only 11 bullish hedge fund positions. Compared to these stocks Liberty Expedia Holdings, Inc. (NASDAQ:LEXEA) is more popular among hedge funds. Considering that hedge funds are fond of this stock in relation to its market cap peers, it may be a good idea to analyze it in detail and potentially include it in your portfolio.

Should You Buy Match Group, Inc. (MTCH)?
Monthly Newsletter Strategy
Download a free copy of our newsletter and see the details inside!
Hedge Fund Resource Center
Related News
The 10 Best Islands to Visit in 2019 5 Most Socially Responsible Companies in America 5 Ways You Can Eliminate Credit Card Debt
Billionaire Hedge Funds