Published on June 27, 2019 at 1:40 pm by Insider Monkey Staff in Bitcoin, Ethereum and Other Cryptocurrencies, News, Tech

Face it: blockchain isn’t that new, mysterious thing it used to be anymore — at this point, some companies even deliberately try to use alternative terms like DLT because they think that the original dub is overhyped.

Nevertheless, blockchain is yet to solve its main dilemma. It has been more than 10 years since the original whitepaper’s release, and the technology is still not adopted at the industrial scale. While yes, numerous companies and governments across the world have been experimenting with the technology, the main consensus is that the technology is not “mature enough”.

So what are the main reasons for this lack of adoption?

Lack of interconnectivity between blockchains

A 2018 Deloitte research estimated that there are as many as 6,500 active blockchain projects using a range of platforms with different coding languages, protocols, consensus mechanisms and privacy measures (this number is likely to get even higher every day, given that the industry is growing at a tremendous speed). For instance, dApp developers working on the Ethereum network cannot interact with their colleagues for the EOS chain, and vice versa.

Of course, the crypto space is often praised for the lack of rules, but, as times shows, some standards — like protocols allowing to freely share information across all blockchain networks— have to be established. That would ensure that crypto projects can interact among each other and grow together, which would be beneficial for everyone involved.

“Standardization could help enterprises collaborate on application development, validate proofs of concept, and share blockchain solutions as well as making it easier to integrate with existing systems,” the Deloitte paper concluded.

Imagine a financial system where companies aren’t able to communicate and share information with each other: Amazon.com Inc’s (NASDAQ:AMZN) products don’t pop up under Microsoft Corporation’s (NASDAQ:MSFT) Bing search or on Facebook (NASDAQ:FB), while Apple’s iPhones can’t be used for texting Android’s users. It seems oxymoronic, to say the least.

What is decentralization truly about?

The other reason is the lack of understanding of what decentralization really is.

The advance of blockchain has made the idea of having a fully-functioning system where no trust is necessary seem more realistic: there is no possibility to break the rules, because the rules are now codified. That idea — presented in the form of a blockchain — could now be applied to many traditional systems like voting, real estate, financial services, etc.

However, it is slightly more complicated. Some people think of decentralization as a binary attribute. When they see a crypto project titled X, they ask: “is X decentralized?”, while there is no ultimate, objective way to establish that. In reality, decentralization is a spectrum, so a better question would be “how decentralized is X?”.

So how these issues can be tackled?

A startup called Wanchain (a bilingual reference; meaning “thousands chains” in Chinese and referring to the concept of “wide area networks” in English) claims to have a solution to both of the above mentioned problems.

Taking on the idea of wide area networks (WANs) — computer networks which extended over large geographical territories at the dawn of the internet age — Wanchain is a cross-chain blockchain infrastructure designed to facilitate asset transfers and host dApps, as per its whitepaper. 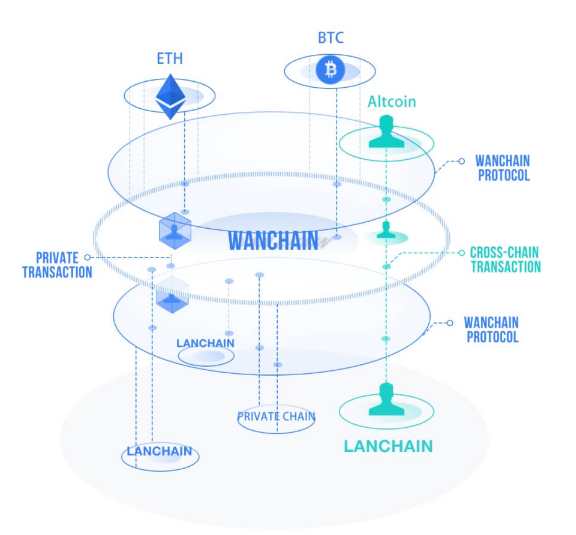 The startup was founded in 2017 by Jack Lu, a long-time cryptocurrency expert who had previously worked as the former co-founder and CTO of Factom.

The project’s ultimate goal is to “connect the world’s digital assets, unleashing the full potential of cryptocurrency and blockchain technology by allowing applications built on Wanchain to provide access to digital assets sitting on different blockchains,” as Lu puts it himself.

At the core of Wanchain’s design is the cross-chain communication protocol which allows for data transfer between otherwise unconnected blockchains. In the most basic sense, the project’s team claim that they have advanced in using smart contracts to securely transfer data from one chain and represent it on the WAN chain.

As a result, building on this network purportedly grants developers with access to many other blockchain platforms. In theory, it means that users could use one blockchain platform’s token on a different blockchain — like using Bitcoin (BTC) for Ethereum dApps, unleashing many opportunities for interoperability and high levels of decentralization.

Once there is connectivity between blockchains, the technology can finally continue its path to mass adoption. In the world where dApps can be reviewed by the entire crypto developers community regardless of what it chain they have been built on, and BTC can be spend on anything blockchain-based, crypto might finally become the undisputed king.

As for Wanchain, its integration with EOS — one of the largest dApp networks — is scheduled for the near future. However, the startup seems to have even more ambitious plans: “We are looking at pretty much every public chain,” Lu has recently told media.

The need for interoperability

While it has been established that blockchain has an enormous potential as a technology, it is now important to find the way to untap it — and achieving interoperability seems to be the most logical step in this evolution. Once the communication between all chains is streamlined, enterprises and states will have all the more reason to employ the technology. As a result, the prospect of mass adoption won’t seem that distant.