The 700+ hedge funds and money managers tracked by Insider Monkey have already compiled and submitted their 13F filings for the second quarter, which unveil their equity positions as of September 30. We went through these filings, fixed typos and other more significant errors and identified the changes in hedge fund positions. Our extensive review of these public filings is finally over, so this article is set to reveal the smart money sentiment towards Leidos Holdings Inc (NYSE:LDOS).

Leidos Holdings Inc (NYSE:LDOS) shares haven’t seen a lot of action during the third quarter. Overall, hedge fund sentiment was unchanged. The stock was in 27 hedge funds’ portfolios at the end of September. The level and the change in hedge fund popularity aren’t the only variables you need to analyze to decipher hedge funds’ perspectives. A stock may witness a boost in popularity but it may still be less popular than similarly priced stocks. That’s why at the end of this article we will examine companies such as Packaging Corporation Of America (NYSE:PKG), Melco Resorts & Entertainment Limited (NASDAQ:MLCO), and Snap-on Incorporated (NYSE:SNA) to gather more data points.

At Q3’s end, a total of 27 of the hedge funds tracked by Insider Monkey held long positions in this stock, no change from the previous quarter. By comparison, 32 hedge funds held shares or bullish call options in LDOS heading into this year. With hedge funds’ positions undergoing their usual ebb and flow, there exists an “upper tier” of notable hedge fund managers who were adding to their stakes significantly (or already accumulated large positions). 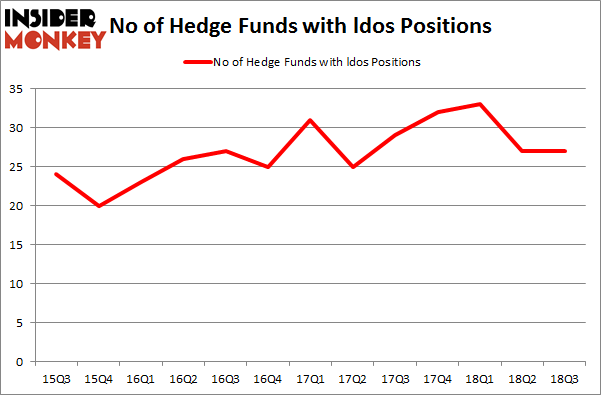 The largest stake in Leidos Holdings Inc (NYSE:LDOS) was held by Southpoint Capital Advisors, which reported holding $152.2 million worth of stock at the end of September. It was followed by Samlyn Capital with a $44.2 million position. Other investors bullish on the company included Locust Wood Capital Advisers, Citadel Investment Group, and Two Sigma Advisors.

Due to the fact that Leidos Holdings Inc (NYSE:LDOS) has faced bearish sentiment from hedge fund managers, it’s easy to see that there exists a select few funds that slashed their entire stakes by the end of the third quarter. It’s worth mentioning that Richard Barrera’s Roystone Capital Partners dumped the largest position of the “upper crust” of funds watched by Insider Monkey, comprising an estimated $35.6 million in stock. Phill Gross and Robert Atchinson’s fund, Adage Capital Management, also dumped its stock, about $19.4 million worth. These transactions are important to note, as aggregate hedge fund interest stayed the same (this is a bearish signal in our experience).

As you can see these stocks had an average of 24 hedge funds with bullish positions and the average amount invested in these stocks was $620 million. That figure was $473 million in LDOS’s case. Melco Resorts & Entertainment Limited (NASDAQ:MLCO) is the most popular stock in this table. On the other hand Grupo Televisa SAB (NYSE:TV) is the least popular one with only 19 bullish hedge fund positions. Leidos Holdings Inc (NYSE:LDOS) is not the most popular stock in this group but hedge fund interest is still above average. This is a slightly positive signal but we’d rather spend our time researching stocks that hedge funds are piling on. In this regard MLCO might be a better candidate to consider a long position.