Solar stocks were on fire this week, soaring double digits on a variety of positive news items. China continues to support a few specific players, major projects are now under way, and analysts are starting to buy into the solar industry. 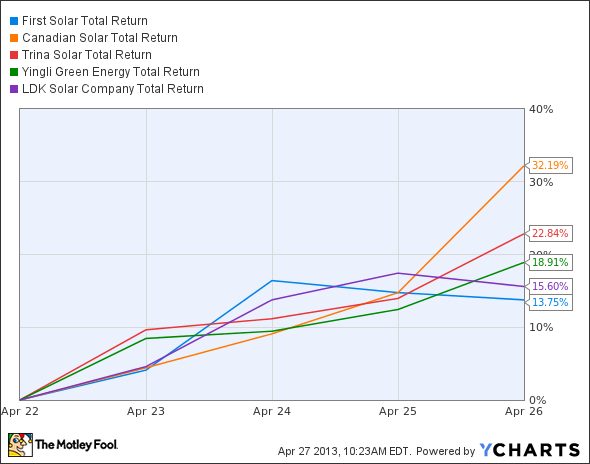 These factors have helped solar this week, so here’s what investors need to know.

China continues to prop up solar
Suntech Power Holdings Co., Ltd. (ADR) (NYSE:STP) and LDK Solar Co., Ltd (ADR) (NYSE:LDK) have both defaulted on loans, but that doesn’t appear to be a clear sign that China is willing to let its solar industry consolidate. These two companies along with countless others would be bankrupt in the U.S. or Europe but investments from state-owned entities and loans from state-owned banks have propped up the entire industry.

This week, LDK Solar received a cash infusion of $25.8 million when Fulai Investments agreed to buy 25 million shares. This is the second investment by the company and may help LDK Solar Co., Ltd (ADR) (NYSE:LDK) pay back loans it defaulted on last week.

Yingli Green Energy Hold. Co. Ltd. (ADR) (NYSE:YGE) was also the beneficiary of a $165 million loan agreement with the China Development Bank, which is owned by the Chinese government. This includes a one-year, $110 million loan and a three-year, $55 million loan for working capital needs. Yingli is one of the most indebted companies in the industry, but the government doesn’t look like it is willing to let it fail.

The reason China is propping up solar is simple. It sees the industry as a key employer and an industry that can grow exports. The government is willing to put billions of dollars behind manufacturers and even solar installations to make sure the industry survives. It’s less clear what that means for U.S. investors. Will debt holders eventually hold all of these companies, which are effectively insolvent anyway? There’s little equity value unless these companies are propped up indefinitely and can grow out of their debt obligations. With losses growing and the next generation of solar products on its way, I don’t see China being a good investment for U.S. investors, even if these companies do survive.

Utility projects get under way
A number of major utility projects marked milestones this week. NRG Energy Inc (NYSE:NRG)‘s 26 MW Solar Borrego I Project had its ribbon-cutting and is now producing at full capacity. The company announced a milestone for its electric vehicle to grid, or eV2g, project. The PJM Interconnection will now be a resource for the project in the hopes of making electric vehicles a backup power source for the grid. This has been an academic idea for a while, and now there’s hope it will become an economic reality.

We may use your email to send marketing emails about our services. Click here to read our privacy policy.
Related Insider Monkey Articles
This Metric Says You Are Smart to Sell GSI Technology, Inc. (GSIT)Exelon Corporation (EXC), Atlantic Power Corp (AT), NRG Energy Inc (NRG): Merchant...