Many investors, including Paul Tudor Jones or Stan Druckenmiller, have been saying for a while now that the current market is overvalued due to a low interest rate environment that leads to companies swapping their equity for debt and focusing mostly on short-term performance such as beating the quarterly earnings estimates. In the fourth quarter, many investors lost money due to unpredictable events such as the sudden increase in long-term interest rates and unintended consequences of the trade war with China. Nevertheless, many of the stocks that tanked in the third quarter still sport strong fundamentals and their decline was more related to the general market sentiment rather than their individual performance and hedge funds kept their bullish stance. In this article we will find out how hedge fund sentiment to Kraton Corporation (NYSE:KRA) changed recently.

Kraton Corporation (NYSE:KRA) shares haven’t seen a lot of action during the third quarter. Overall, hedge fund sentiment was unchanged. The stock was in 22 hedge funds’ portfolios at the end of September. The level and the change in hedge fund popularity aren’t the only variables you need to analyze to decipher hedge funds’ perspectives. A stock may witness a boost in popularity but it may still be less popular than similarly priced stocks. That’s why at the end of this article we will examine companies such as U.S. Physical Therapy, Inc. (NYSE:USPH), WSFS Financial Corporation (NASDAQ:WSFS), and Gran Tierra Energy Inc. (NYSEAMEX:GTE) to gather more data points.

What have hedge funds been doing with Kraton Corporation (NYSE:KRA)? 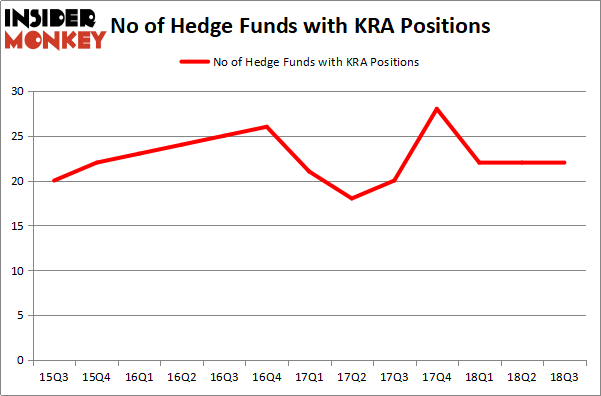 More specifically, Renaissance Technologies was the largest shareholder of Kraton Corporation (NYSE:KRA), with a stake worth $47.2 million reported as of the end of September. Trailing Renaissance Technologies was Royce & Associates, which amassed a stake valued at $17.8 million. Rubric Capital Management, GLG Partners, and Corsair Capital Management were also very fond of the stock, giving the stock large weights in their portfolios.

Because Kraton Corporation (NYSE:KRA) has witnessed a decline in interest from the aggregate hedge fund industry, we can see that there was a specific group of money managers who were dropping their positions entirely heading into Q3. At the top of the heap, Adam Fox and Samuel Elder’s Altalis Capital Partners said goodbye to the biggest position of the 700 funds monitored by Insider Monkey, worth close to $5.7 million in stock. John Overdeck and David Siegel’s fund, Two Sigma Advisors, also cut its stock, about $0.8 million worth. These moves are important to note, as aggregate hedge fund interest stayed the same (this is a bearish signal in our experience).

As you can see these stocks had an average of 12.5 hedge funds with bullish positions and the average amount invested in these stocks was $206 million. That figure was $120 million in KRA’s case. Gran Tierra Energy Inc. (NYSEAMEX:GTE) is the most popular stock in this table. On the other hand WSFS Financial Corporation (NASDAQ:WSFS) is the least popular one with only 10 bullish hedge fund positions. Compared to these stocks Kraton Corporation (NYSE:KRA) is more popular among hedge funds. Considering that hedge funds are fond of this stock in relation to its market cap peers, it may be a good idea to analyze it in detail and potentially include it in your portfolio.