Published on December 7, 2020 at 11:37 am by Insider Monkey Staff in Bitcoin, Ethereum and Other Cryptocurrencies, News, Tech

According to Cho Jin-Seok, Kookmin Bank’s Head of IT Technology Innovation Center, the new join-venture will allow KB to launch its digital asset custody services and more in less than a year.

Beta Service to Launch This year

The new collaboration comes in combination with several other major crypto firms, including #Hashed, the leading crypto fund and accelerator in South Korea, and Haechi Labs, a Seoul-based blockchain wallet development firm. Both #Hashed and Haechi Labs also made strategic contributions to KODA.

As per Korean news outlet DDaily, Kookmin Bank is expected to be the first banking entity in South Korea to launch its own digital asset custody service, which is made possible thanks to its joint venture with KODA. Although the bank plans to begin by launching crypto custody, anti-money laundering (AML), and OTC trading services early next year, it also intends to target crypto deposit, lending, and payments services shortly thereafter.

The bank is set to begin rolling out crypto custody-related services for institutional investors as soon as possible, while a beta service for corporate users is set to be unveiled this month. 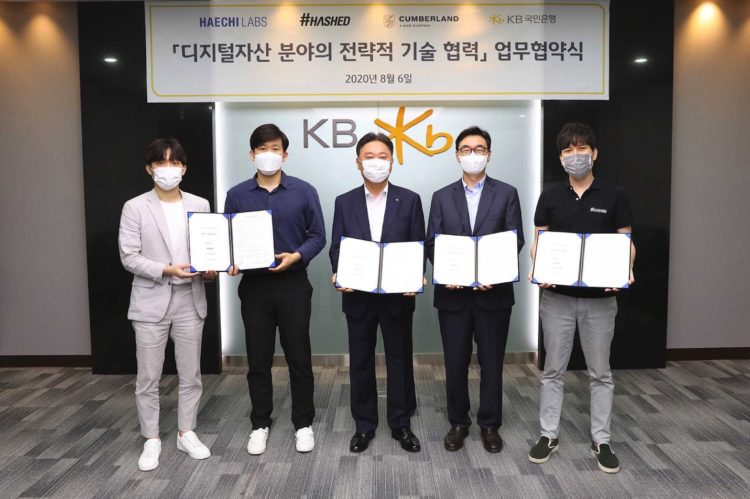 The move comes shortly after KB formed a strategic partnership with #Hashed. As part of the collaboration, the two firms are set to “advance the emerging market for digital assets in South Korea,” and build out the technology stack that will help the solutions to make digital assets more accessible.

During his presentation titled ‘Digital Assets and DeFi from the Financial Industry’ at ‘THE CONFERENCE 2020’ Cho Jin-Seok also highlighted a potential interest in moving into the emerging world of decentralized finance (DeFi), stating: “I think that if the existing traditional financial sector in the institutional sector covers the DeFi service, which is insufficient, the risks of DeFi can be covered.

In January, Kookmin Bank applied for a trademark called KBDAC (Kookmin Bank Digital Asset Custody). The trademark, which is still in consideration, covers over 20 areas relating the cryptocurrency industry, including the trading of popular digital assets like Bitcoin (BTC) and Ether (ETH), as well as virtual settlement services against fiat currency.

“By creating an ecosystem of the digital asset market, we will discover innovative services with market participants and create growth opportunities together,” said a spokesperson for the bank.

The cryptocurrency market has witnessed a dramatic recovery after a shock crash that also rocked the stock market in March this year. Major cryptocurrencies like Bitcoin (BTC-USD), Ethereum (ETH-USD), and XRP (XRP-USD) have all gained between 160% and 350% against the dollar year-to-date (YTD), eclipsing the gains seen by even the best performing stock indices, including the Dow Jones Industrial Average (^DJI) and NASDAQ Composite (^IXIC).

This renewed interest has seen banks the world around reconsider their stance on digital assets, while around 80% of central banks are now actively working on or exploring the possibilities of their own central bank digital currency (CBDC).

Is Lifevantage (LFVN) A Good Stock To Buy Now?
Monthly Newsletter Strategy
Download a free copy of our newsletter and see the details inside!
Hedge Fund Resource Center
Related News
10 Best Auto Stocks To Buy Now 50 Most Beautiful Cities in the US 15 Largest Fiber Optic Companies in the World
Billionaire Hedge Funds