KLA-Tencor Corporation (NASDAQ:KLAC) has seen an increase in hedge fund interest lately. KLAC was in 27 hedge funds’ portfolios at the end of September. There were 26 hedge funds in our database with KLAC holdings at the end of the previous quarter. Our calculations also showed that klac isn’t among the 30 most popular stocks among hedge funds.

What have hedge funds been doing with KLA-Tencor Corporation (NASDAQ:KLAC)? 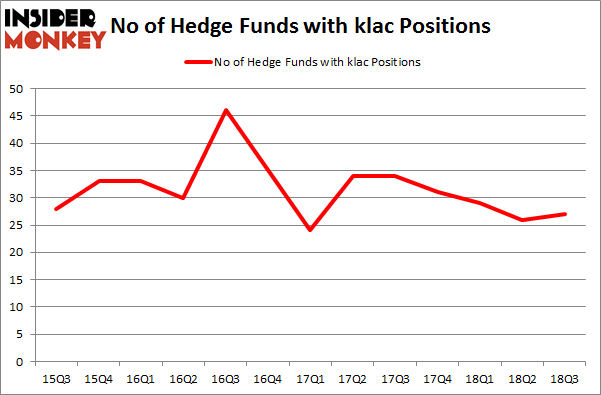 Among these funds, Citadel Investment Group held the most valuable stake in KLA-Tencor Corporation (NASDAQ:KLAC), which was worth $166.9 million at the end of the third quarter. On the second spot was AQR Capital Management which amassed $140.9 million worth of shares. Moreover, Millennium Management, Two Sigma Advisors, and D E Shaw were also bullish on KLA-Tencor Corporation (NASDAQ:KLAC), allocating a large percentage of their portfolios to this stock.

As aggregate interest increased, key hedge funds have jumped into KLA-Tencor Corporation (NASDAQ:KLAC) headfirst. PEAK6 Capital Management, managed by Matthew Hulsizer, created the biggest position in KLA-Tencor Corporation (NASDAQ:KLAC). PEAK6 Capital Management had $4.5 million invested in the company at the end of the quarter. Matthew Tewksbury’s Stevens Capital Management also initiated a $3.8 million position during the quarter. The only other fund with a brand new KLAC position is David Andre and Astro Teller’s Cerebellum Capital.

As you can see these stocks had an average of 26.25 hedge funds with bullish positions and the average amount invested in these stocks was $740 million. That figure was $909 million in KLAC’s case. Tiffany & Co. (NYSE:TIF) is the most popular stock in this table. On the other hand Banco de Chile (NYSE:BCH) is the least popular one with only 2 bullish hedge fund positions. KLA-Tencor Corporation (NASDAQ:KLAC) is not the most popular stock in this group but hedge fund interest is still above average. This is a slightly positive signal but we’d rather spend our time researching stocks that hedge funds are piling on. In this regard TIF might be a better candidate to consider a long position.

Incandescent Capital Gives Its View on Heritage Insurance
Monthly Newsletter Strategy
Download a free copy of our newsletter and see the details inside!
Hedge Fund Resource Center
Related News
Electro Scientific Industries, Under Armour, Chegg and More: Why These Stocks Are Surging Should You Add KLA-Tencor Corp (KLAC) to Your Portfolio? Massive Cluster of Insider Selling at Semiconductor-Equipment Maker After Call-Off of Buyout Deal, Plus Insider Trading at AT&T, Delta, More Why KLA-Tencor, Lam Research, JD.Com And More Are Trending JPMorgan’s Top Dividend Stocks for 2016, Part 4 Here Is What Hedge Funds Think About KLA-Tencor Corporation (KLAC) Five Stocks that Are Registering Gains on Wednesday for Various Reasons The 10 Best Islands to Visit in 2019 5 Most Socially Responsible Companies in America 5 Ways You Can Eliminate Credit Card Debt
Billionaire Hedge Funds